For a more active holiday, try a walking safari. Zambia is arguably the best country in Africa for guided game walks and is widely recognised for its enthusiastic and extremely knowledgeable field guides. Now widespread throughout Southern Africa’s major parks, the concept was first introduced in the Luangwa Valley, which remains the county’s top walking safari destination. Luangwa’s walking safaris are small scale and extremely popular. So popular, in fact, that some trails book out far in advance. You’ll need to start planning up to two years ahead of time if you want to experience the best trails in peak season.

Walking safaris come in various forms, the most strenuous being multi-day, mobile safaris, where you’ll hike from temporary camp to temporary camp, covering eight to 12km each day. The pace is generally slow and steady, with plenty of breaks to appreciate the surroundings. It’s far more active than sitting in a vehicle, but the idea is to take things slowly and really get closer to nature. Zambia’s guides will turn every tiny detail into a captivating story – from the barest hint of an animal’s paw print to the tiny flowers and insects buzzing by. Encountering predators on foot is extremely rare, but there’s a huge thrill just knowing they’re around. There’s always some danger with being out in such wild country on foot, but with such experienced guides the risks are very low. 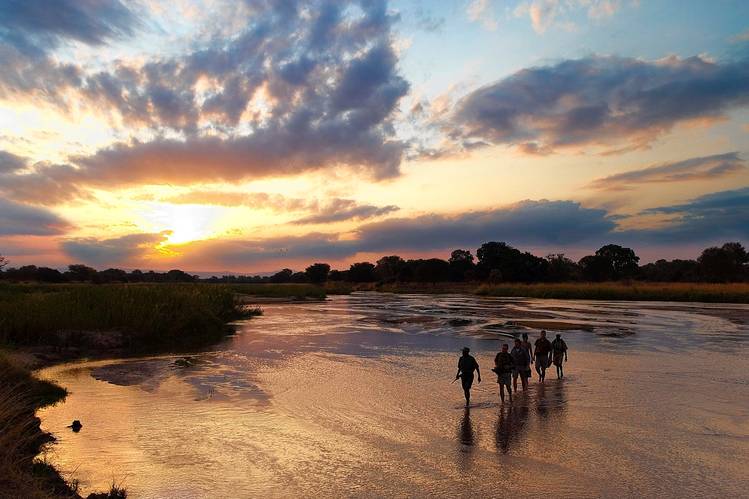 North and South Luangwa, the Lower Zambezi and Kafue National Parks all offer excellent walking safaris and June to September is the best time to go. October is prime game-viewing season, but it can be too hot for comfortable walking, except perhaps in the very early morning. If you like the idea of a walking safari, but not a multi-day hike, then shorter day and half-day excursions are also available (in fact they’re the norm). These are often the highlight of any safari in Zambia – definitely not to be missed if the opportunity arises!

For an even wilder active holiday consider a guided canoe safari on the lower Zambezi River. Again, half and full-day options are available from most camps in the region, or you can paddle the entire length of the Lower Zambezi National Park, finishing up on the Mozambique border. As with the multi-day walking safaris, these canoe safaris are not meant to be overly strenuous. If a head-wind kicks up it can indeed be heavy going, but the route is always run downstream and not intended to be a workout. Again, there are risks involved, this time mostly from grumpy hippos. It’s definitely one for the more adventurous as you’ll be carrying your own gear and camping wild the riverbank each night. This is one of the wildest stretches of river in Africa and big game sightings are virtually guaranteed.

Multiple ethnicity in Zambia mean a plethora of languages and dialects Zambia’s official language is English, but there are more than 70 different languages and…

The first thing to do when preparing for Zambia is to book an appointment with a local travel clinic and go and speak to a doctor. The internet is full of African health…

Why go to Zambia

Although not entirely unique to Zambia, the country stands apart from others in the region in that the majority of its lodges and bush camps are owner-run. This tends to…

One of Zambia’s most remote national parks, Liuwa Plain lies west of the upper Zambezi River, close to the border with Angola. It’s made up of vast grasslands with a…