Paved highways connect Botswana’s major towns and while most are in good condition, some sections are badly potholed. You’ll need to keep an eye out for these, as well as for both wild and domesticated animals. Stray cattle and donkeys are common near villages and the donkeys can be particularly dangerous. They have a tendency to stand in the middle of the road, refusing to move and forcing cars to stop and drive around them.

Botswana’s traffic police are active on the highways and often set up radar speed traps after villages and vet fences. Don’t be tempted to accelerate back to highway speeds until you see the appropriate signage. 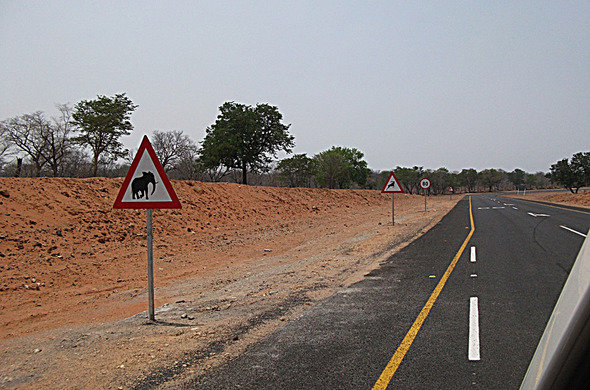 Away from the highways, the road conditions deteriorate rapidly. There’s not much in the way of secondary roads and you can go from tarmac to thick sand in a few hundred metres. Particularly sandy sections include the access roads around Mabuasehube Game Reserve and the Kgalagadi, the Xade Gate road into the Central Kalahari, the main entrance road into Nxai Pan National Park, the road north of Maun to Moremi, and pretty much everything from the Savuti region to the Chobe River. An unusual route, and perhaps the sandiest of all, is the north-south track between Khutse Game Reserve and the Central Kalahari. It’s about 230km of deep sand from Khutse to Xade Gate and shouldn’t be attempted lightly.

Botswana is well equipped for self-drivers, but there are long distances between parks, lodges, campsites, and towns, so travelling by road can be time consuming. Fortunately, much of northern Botswana is land dedicated to conservation and even when driving outside of the national parks, wildlife roams free, so the opportunities to see animals en route between locations are abundant.

Fly-in safari goers will save plenty of time as they make use of Botswana’s many scheduled flights and air-transfers, but this method of travel is obviously more expensive. There are road transfers available from the major towns, which offer a more affordable way to get from A to B, and although more time consuming, allow more time for game spotting.

The Historic Baobabs in Botswana

Safari lodges and camps in Botswana serve an array of internationally recognised food for breakfast, lunch, and dinner, and dietary requirements can be catered for with…

A Kalahari quad-biking adventure should be on the bucket list of all daring adrenalin seekers. Revving through the isolated moon-like vistas of the Makgadikgadi gives…

There are three campsites within Chobe National Park, all unfenced and overlooking beautiful wild areas while still having basic ablution facilities (flush toilets and…

Museum at Jack’s Camp in Botswana

Jack Bousfield was a bushwhacking crocodile hunter who arrived in Botswana from his Tanzanian homeland in the 1960’s. He was completely overtaken by the romance of the…