Serengeti and the Ngorongoro Crater

At 14,763 square kilometres in size, the Serengeti is arguably the finest national park in Africa and offers a wealth of wildlife viewing opportunities. Pretty much every large animal in East Africa can be regularly seen in the national park or wider ecosystem. When you include all the contiguous protected areas, of which Ngorongoro is one of the most noteworthy, the total size of the entire Serengeti-Mara ecosystem is a staggering 30,000 square kilometres packed choc-full of truly extraordinary wildlife sightings. Renowned for its predators – especially lions, leopards and cheetahs – and with plenty of elephants favouring the western woodlands of Grumeti, the Serengeti dazzles even the most hardened safari critics. There is even a recovering black rhino population concentrated around Moru Kopjes giving visitors a realistic chance to sighting all of the Big Five (lion, elephant, rhino, leopard and buffalo), although the critically endangered black rhinos will undoubtedly prove the greatest challenge. The Serengeti ecosystem is also a renowned bird-watching destination, with over 500 species recorded to date.

Exploring the unique Ngorongoro Crater – surrounded by the towering volcanic walls on every side and blessed with prolific and extremely well-habituated wildlife – almost feels like you’re driving through a zoo; only the surrounding crater scenery is jaw-droppingly impressive. With the greater Serengeti ecosystem so blessed with wildlife and scenic beauty, it is hard to imagine it could have anything more to offer, but the great East African migration steals the show.

When it comes to Serengeti highlights there are so many (as alluded to previously), but there is quite simply nothing to match the migration with its sheer numbers, noise, majesty and splendour. Importantly, there is no beginning or end to the migration, so you can witness the great herds during any month of the year so long as you plan your safari to visit the right region within the ecosystem to coincide with where the animals are concentrated at that particular time of the cycle. The rainfall drives the movement patterns of the great herds of wildebeest and other plains game, so it must be emphasized that the description below refers to a typical year of normal rainfall in the usual seasons. It is not uncommon for the wildebeest movements to be delayed or sped up if unseasonal rain falls in another part of the ecosystem, attracting the animals to the green flush that follows. Typically the wildebeest and zebra herds, along with decent numbers of eland and gazelles, will shift as follows: 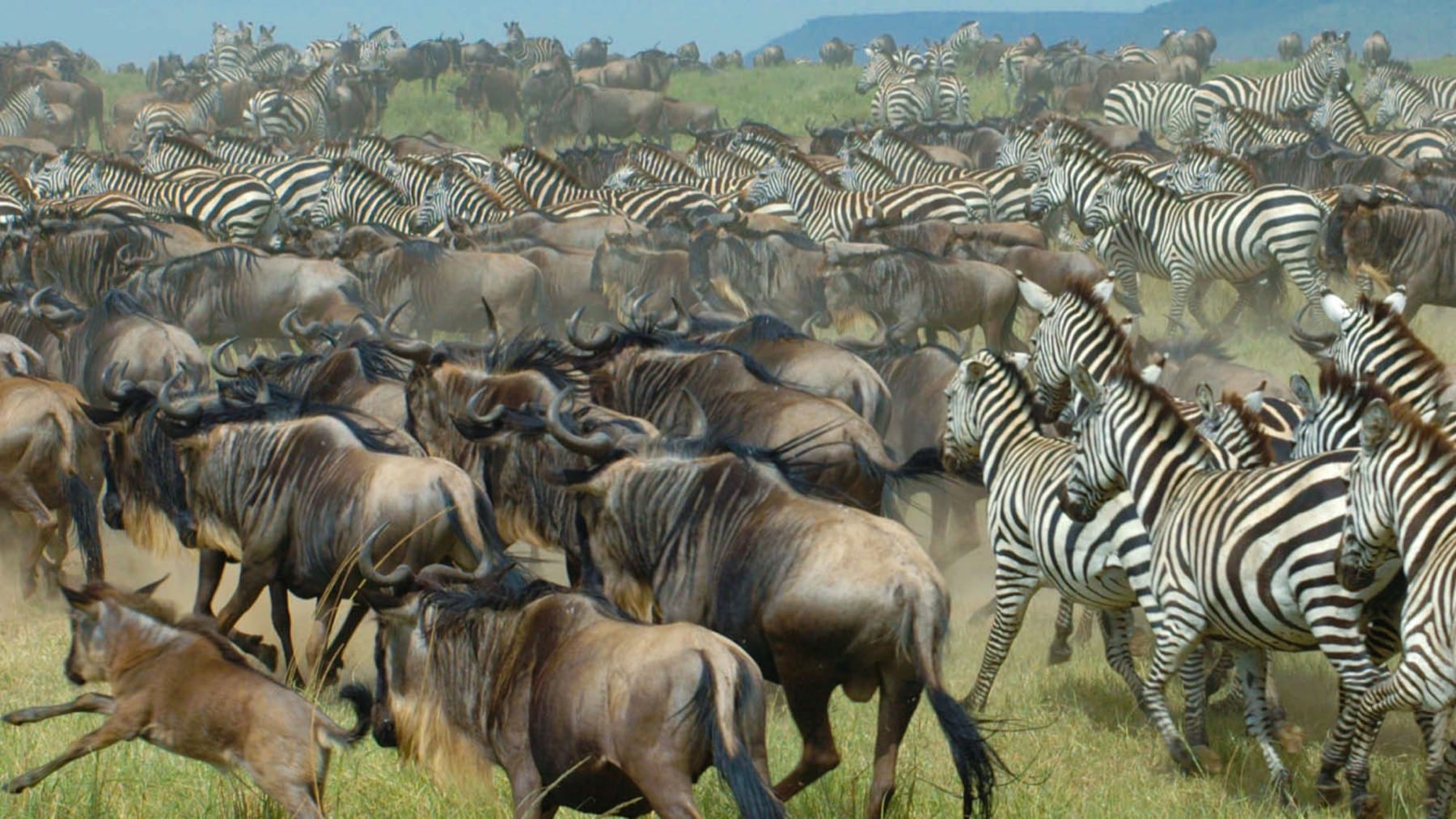 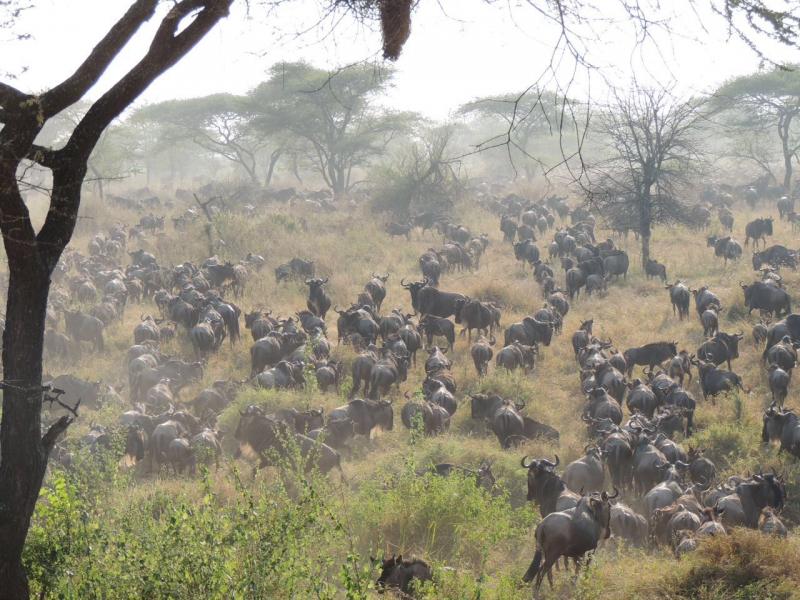 The migration is quite unique in that it is a perpetual phenomenon without beginning or end. It is universally regarded as one of the greatest wildlife spectacles on earth. The sound alone is deafeningly impressive. It is, however, often very difficult to appreciate the scope and sheer size of the migration because, without a bird’s eye view of proceedings, it is difficult to comprehend the sprawling scale of the wildebeest numbers. A sunrise hot air balloon ride is the ideal way to appreciate the huge herds and long columns of plodding animals. Standing atop a rocky kopje is another recommended way to gain some perspective to better appreciate the sheer number of animals involved.

While most safari goers target the June-July period for the western corridor and Grumeti River crossings, as well as the July-October period for Lamai and the Mara River crossings, there is a strong argument for waiting for the less popular rainy season months to view the wildebeest in the southern plains when they give birth to half a million calves over a three week period – usually in February.

There are plenty of good active holiday options in Tanzania, including hiking and mountain climbing, chimpanzee trekking, walking safaris, snorkelling and scuba diving,…

The rains depends on your chosen location in Tanzania, while the northern parks are more likely to see dry spells, while the western parks remain rather wet…

As long as you practice basic safety awareness and avoid lonely stretches of deserted beach, especially at night, Zanzibar and the other Indian Ocean islands of Pemba and…

If there is one month that is probably worth avoiding for a visit to Tanzania, then that would have to be the rain-soaked month of April. This is by far the wettest month…

In general, Kenya is the better know safari destination, but consequently most of its prime parks and reserves are considerably busier than across the border in Tanzania.…