Morning Carel - front-end update We had 12 mm rain last night and in some areas perhaps a little heavier, this rain pattern stirred the resident wildebeest whereby many had moved away out from the Bila Shaka and Marsh areas towards the north flank of Rhino ridge. Pockets of Wildebeest have moved into the paradise plains area of topi flats near the main crossing point. An estimated 250 Zebra had crossed at the rocky crossing late yesterday evening from the trans Mara and one of them had been caught by a crocodile but it got away with a broken fetlock, I understand it was thrown over and over in the water by the crocodile, this morning further downstream about 2 kilometers there were an equal number of Zebra building waiting to cross from the trans Mara side although by 1.20 pm they were still in-situ. Ariana 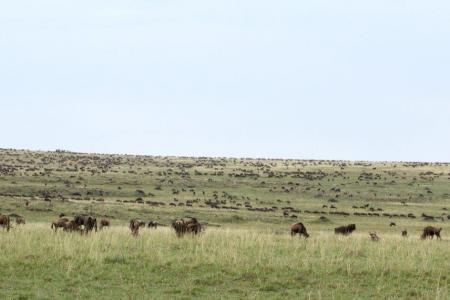 Previous: The front end has arrived