What to expect this crossing season

June to September is what is considered the crossing season and during our 2015 crossing season we still have two rivers to cross and the herds are running late this year.

What does this mean?

There is still a good chance of Grumeti River crossings with most of the migration still south of the Grumeti, the herds are heading west slowly and it seems that if there is late rain in the Lobo, Klein's Camp areas that we might still have a full Grumeti River with wildebeest having to cross although this would be much later than the previous two years.

Grumeti River crossings during June are likely. Mara River crossings also looks to be later than the last couple of years and we are expecting the first of the crossings to start during July even the last half of July, we are predicting a long crossing season with the herds having lots of grazing and water options, in short, the dry season will start later this year and with it the need to move north. To be on the safe side, go to both the Masai Mara and the Serengeti sides and follow us to make informed decisions closer to the time, for yourself or your clients. 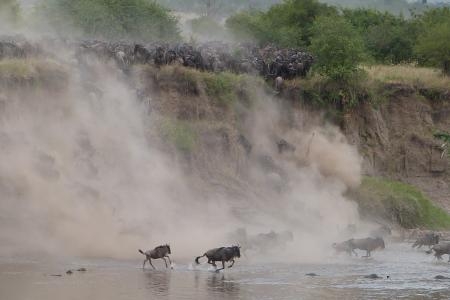 Previous: Back to Ndutu and some movement from east to west towards Moru