The migration is spread out over the southern plains

Now in Kakessio, having driven in from Arusha via the Crater rim and magical Mysigio. One of the must-do drives in Africa through the avenues of old growth Acacia Lahai… Scattered storms in the mid afternoon have been the current weather pattern over the past days.

Large storm clouds gathering around Oldeani and the Crater, drift west over the southern plains. Yesterday over the “Miti Mitato” area, today along the Maswa boundary road, there are reasonable herds spread out around Esere and Laetoli.

Smaller herds here in Kakessio but more on the horizon behind Kimuma. The masai are slowly drifting away from their summer pastures headed for the plateau behind us at Ngaireshi. Separately there are big herds on the plains west of Ndutu towards Kusini and the tree line there 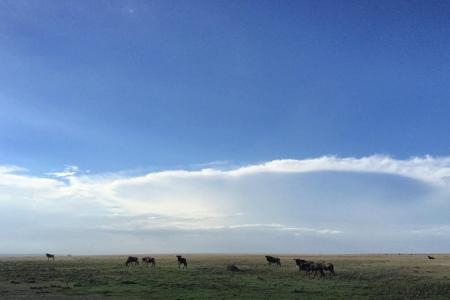 Wildebeest on the Southern Plains - Image by Alex Walker

Next: Some movement back up to Moru Kopjes