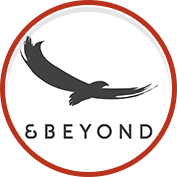 Morning Carel, updates from our camps and lodges

Over in the Western Corridor, the roaming herbivores are happily grazing the plains just to the east of andBeyond Grumeti Serengeti Tented Camp at Nyasirori. Large herds are being witnessed drinking from the Grumeti River, Kanyanja River and Majimbele Swamp. The Nyasirori plains are lush and green and there is a dam full of water, both of which are great indicators that the nomadic herds will likely stick around for a while.

Guests at andBeyond Grumeti have been having the most incredible sightings, not just of the wandering wildebeest, but also of the many predators that are taking full advantage of the abundance of prey.

Further north, guests at andBeyond Klein’s Camp, as well as our two andBeyond Serengeti Under Canvas semi-permanent camps (currently positioned at Kogatende), are also watching the drama unfold as the nail-biting Mara River crossings commence. The largest herd braved the crossing on Sunday.

One lucky wildebeest is counting its blessings (and bruises). En route from Lobo Airstrip to andBeyond Klein’s Camp, ranger Seleu Kedoki discovered approximately 700 wildebeest crossing the Grumeti River. While the guests were taking photos, the massive splinter group cut back and scampered away from the river’s edge. A leopard chose to take the “shooting fish in a barrel” approach and caught an unsuspecting wildebeest.

There are still several thousand wildebeest stationed between the andBeyond Klein’s Camp private wildlife concession and Bologonja, which means there are many more exciting crossings to come in the next few weeks. As the crossings continue, our guests north of the border at andBeyond Kichwa Tembo Tented Camp and andBeyond Bateleur Camp are now seeing the enourmous herds on the horizon. 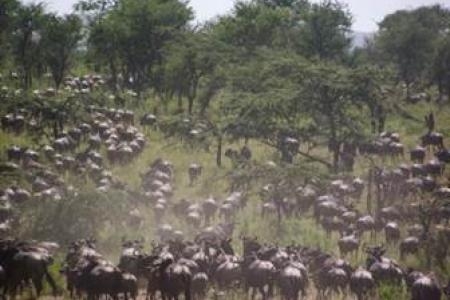 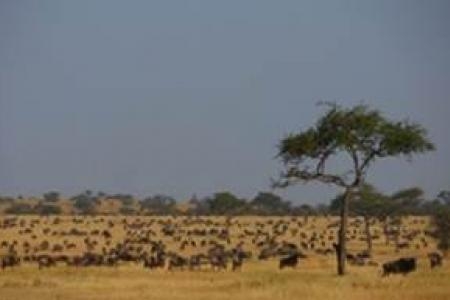 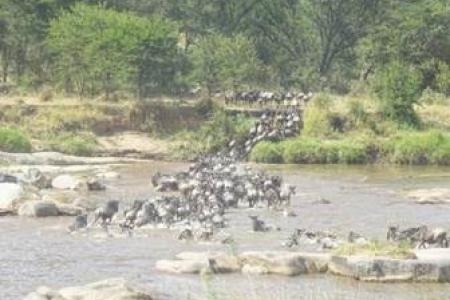 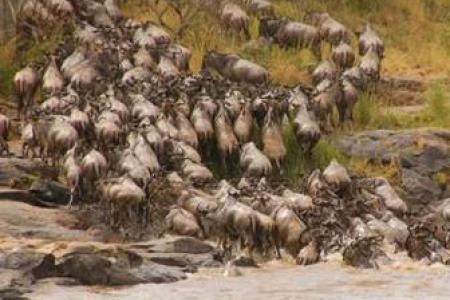 Previous: Crocodile takes down wildebeest at the Mara River

Next: River crossings at Lookout Hill