Many were taken by crocodile

Resident wildebeest, zebra and the spearhead of the main group of wildebeest from the migration that came in in the last week of May are going back and forth between the Masai conservation areas and then back towards the Musiara, Marsh, Topi, Rhino Ridge and Bila Shaka grassland plains. Crossings on the Mara River at Paradise have been going on since the last week of the month with estimated of 10-15000 animals at a time, many were taken by crocodile. On the 28th, a good number crossed at the rocky crossing where at least 20 animals died while crossing and this was often the case when the wildebeest all converged on a narrow exit and the exit passage-ways get wet from massing bodies and hoofs. At each crossing up to three animals were being taken by crocodile. On the 30th at 3pm, a large number of wildebeest estimated by guides to be over 20,000 crossed the Mara River at the main crossing point, one was seen taken by crocodile and three were seen floating down. Today there are large numbers on Bilashaka, and the north fan of Rhino Ridge. 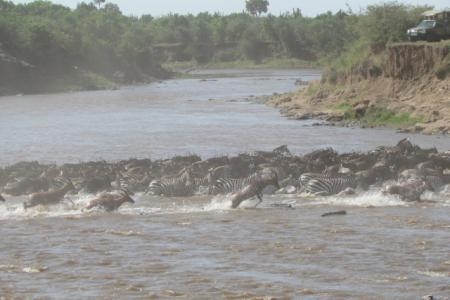 Next: Wonderful crossings on the Serengeti side