There’s more to the Zambezi River than just its powerful cascade down a 1.7 kilometre-wide gorge to form Victoria Falls. This mighty river – Africa’s fourth largest – draws adventure seekers from all over the planet for Africa’s most thrilling white-water rafting on powerful Grade Five rapids. White-water rafting is not the only way to have fun on the Zambezi’s rapids though: for more adventurous thrills there’s river boarding, where you surf the rapids on a bodyboard, as well as jet boating over the water at 100km an hour.

The river also offers more relaxing activities to match the high-intensity adventures. The Zambezi courses its way through beautiful landscapes of national parks on either side of the border, supporting a variety of wildlife and bird species – and there are lots of ways of taking in the scenery and animals without the adrenaline kick. Paddle along the river on relaxing canoe safaris, which get you close to elephant and buffalo drinking on the banks, or do the Livingstone drift tour, where a guide paddles you down the river in an inflatable raft. The famous sunset river cruises are a must: explore the river at a languid pace on a big boat and take in a glorious sunset with cocktails and snacks.

Highlights of the region

White-water rafting on the Zambezi River is said to be the best in Africa, and with nearly half of the river’s rapids classified as Grade Five, tackling the river is a wild white-knuckle ride. In between the thrilling rapids there are stretches of calm where you can soak in the dramatic scenery from the bottom of the gorge. White-water rafting can be done in both Zambia and Zimbabwe on half-day or full-day excursions, but you can also sign up for overnight or multi-day trips, where you camp out on beautiful beaches in the wilderness. River boarding is another heart-pumping white-water ride: don a wetsuit, helmet, shin guards and flippers and jump on top of a bodyboard to cruise the rapids and navigate the rocks of the Zambezi face first. It’s a close contender with white-water rafting and bungee jumping for the most thrilling adventure you can have in Victoria Falls. If speed is your thing, book a jet boating ride in either Zambia or Zimbabwe on a super-powered jet-propelled boat, which shoots over the Zambezi and its rapids at 100km an hour. Jet boats can cruise in shallow water, so you can explore parts of the river that are inaccessible to bigger boats. A thirty-minute ride includes a visit to the Boiling Pot at the base of the falls, a couple of rapids and some tricks such as 360-degree turns. 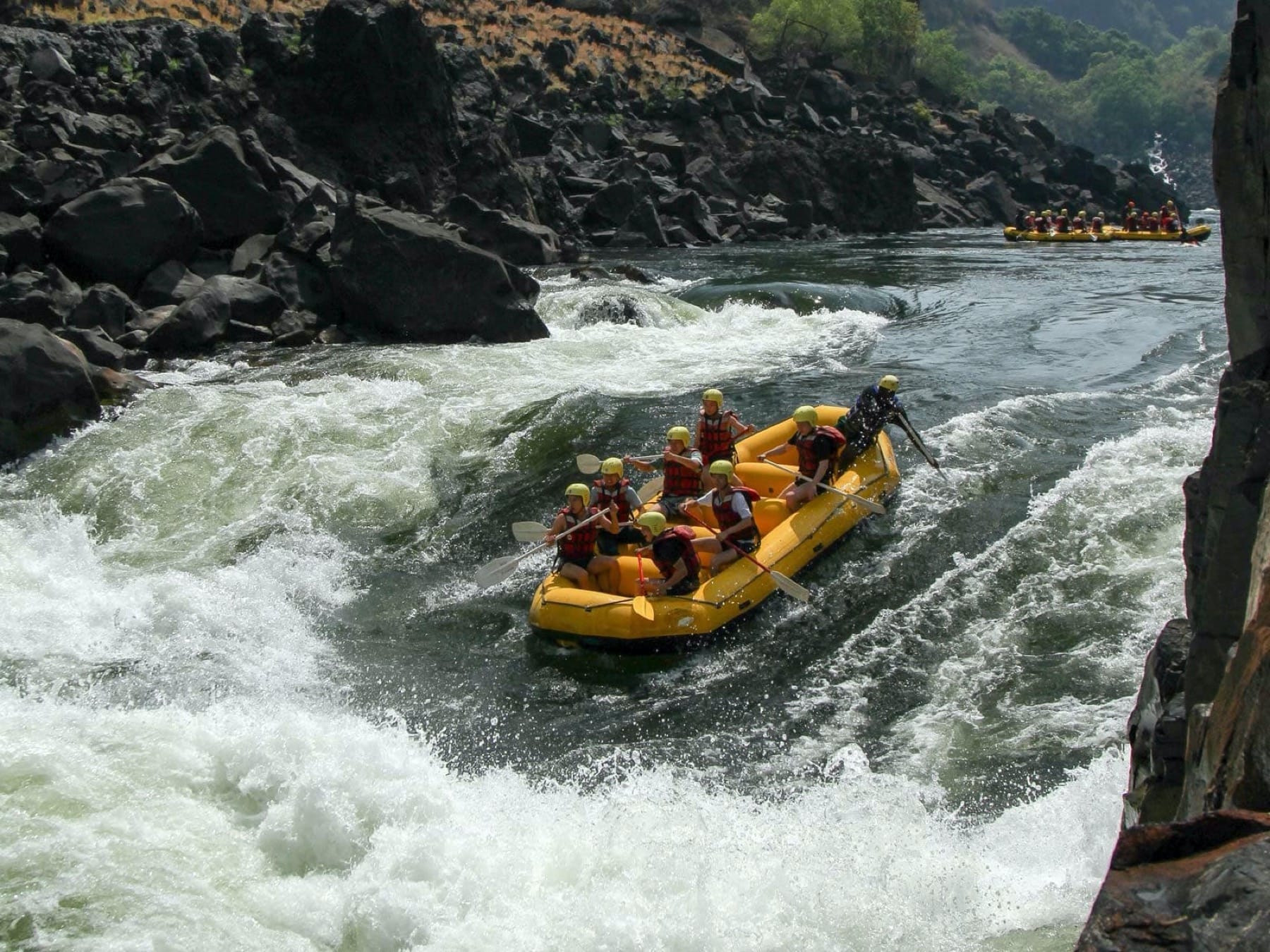 Paddling down the Zambezi and its many channels on a canoeing safari with a qualified guide is a wonderful way of birdwatching for the more than 400 species and to spot wildlife such as hippos, crocodiles and antelopes on shore. You’ll be able to get closer to big game – such as elephants – than you would in a game drive vehicle, so it’s a wonderful way to experience the bush on half or full day trips. You can also do multi-day adventures, where your nights are spent camping under the stars on riverside beaches.

An even more sedate alternative to canoeing trips is the Livingstone Drift: float in an inflatable raft and get paddled down the river by a guide who will point out animals and birds, while you sit back and sip on a beer. 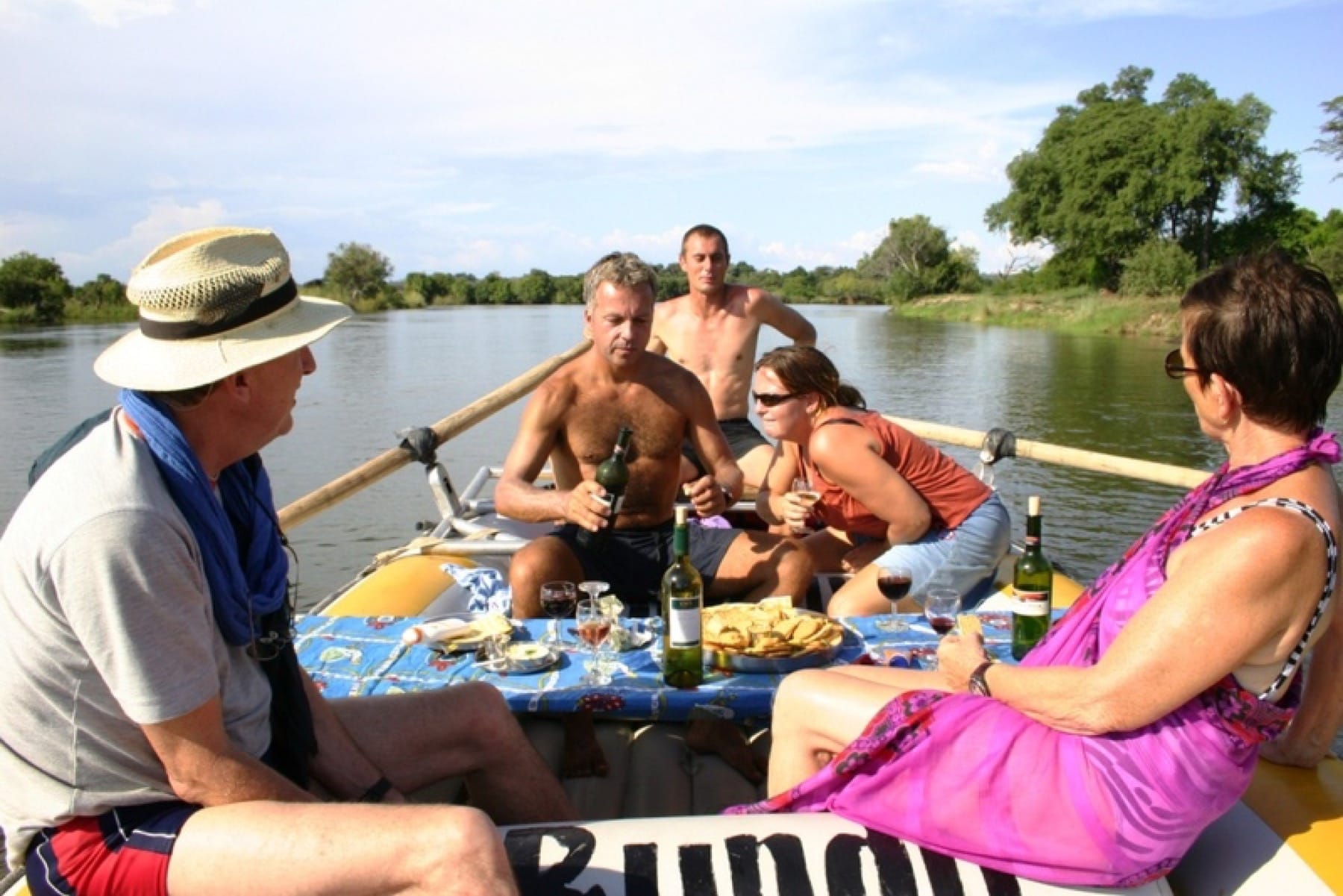 Cruises on the river are offered on both sides of the border, with the large African Queen on the Zambian side which takes more than 100 passengers, and smaller boats on the Zimbabwean side. On boat trips you can get cocktails and snacks, or a full dinner. There couldn’t be a more relaxing way to take in the magnificent riverside scenery, spot wildlife such as hippos, crocodiles, elephant, buffalo and see some of the hundreds of species of birds that populate the region.

Fishing excursions on the Zambezi are a must for keen anglers: the river is home to more than 75 species of fish, the most famous of which is the toothy tiger fish. This big predator – which can weigh up to 15 kg – is regarded as one of the best freshwater fighting fishes in the world, and it’s the most prized catch on the river. Fishing trips can take anything from a few hours to a full day, and even if you don’t catch anything you’ll have a great day out on the river exploring channels and pools and spotting birds and wildlife.

Practical advice about the region

White-water rafting is not a year-round activity: during the months of March/April to July, when the Zambezi River is at its highest, you can’t go rafting at all. August to December is the best time of year for white-water rafting (because the low water levels mean the most exciting rapids), with August and September being the optimal months. You need to be fairly fit to do white-water rafting as it’s quite a serious adventure and the walk in and out of the gorge is strenuous (bring good walking shoes along for the hikes).

While you can do white-water rafting in both Zambia and Zimbabwe, a benefit of the Zambian side is that you don’t have to clamber out of the steep gorge at the end of your rafting adventure because there’s a cable car lift that takes you up.

The minimum age for river boarding is 13, and for white-water rafting it’s 15, while the canoeing safaris on the Upper Zambezi are fairly easy going, so children aged seven and above are allowed to join trips.

If you’re after tiger fish, late May to December is the best time of year to try to catch these ferocious predators, while August to November is the ideal time for fishing generally because of the low water level of the Zambezi.

What sort of traveller should go to the Zambezi River?

Trips on the Zambezi River are definitely for the adventurers: tackle challenging rapids on white-water rafting trips and on riverboarding adventures or shoot over the river at a high speed in a jet boat.

Solo travellers will be able to join up with groups for white-water rafting, jet boating, fishing trips and canoeing safaris, and the sunset river cruises are very social.

Zambezi River trips are great for families too. While there’s an age limit of 15 white-water rafting and river boarding, children only need to be seven and above to go the canoeing safaris, and river cruises are for all ages.

There’s more to the Zambezi River than just its powerful cascade down a 1.7 kilometre-wide gorge to form Victoria Falls. This mighty river – Africa’s fourth largest…

Kids of all ages will love visiting Victoria Falls: seeing the world’s biggest waterfall and getting drenched by mist and spray ranks up there with the best travel…

Climate In November the summer rains begin, bringing a welcome relief from the intense heat of October, although it’s still very hot. Highlights of the month The…

There are some superb luxury lodge and boutique hotels in both Zambia and Zimbabwe which offer stylish rooms including spacious and lavish suites, a host of activities,…

Why would people come back?

Apart from the fact that there are so many activities to do in the Victoria Falls area, an excellent reason to return to the destination is to experience the waterfalls…

Climate October is known as “Suicide Month”: this is the hottest month of the year with an average of 34C for day time temperatures but the highs can go above…