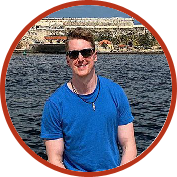 Henryk Sarat filmed one of the most scenic parts of the Great Migration crossing the Mara River!

Henryk Sarat waited for about four hours while the herds traveled along the river and stopped at multiple points to sniff if there were any crocodiles in the water. In this instance, there was a hippo that wanted to attack a crocodile. This is a perfect example of where an "enemy of an enemy is my friend".

The hippo was just relaxing and sleeping in the water and all of a sudden, thousands of wildebeests trample over the hippo. The hippo ended up swimming away because it wasn't sure what was going on. The hippo's day was for sure ruined. It was hilarious watching the hippo confused!