The western side of the Etosha National Park has its own character and appeal, plus the all-important wildlife encounters (although game is considered to be sparser). The only accommodations here, a NWR luxury eco-camp called Dolomite and a fenced, camping-only site called Olifantsrus – opened in 2010 and 2014 respectively. This section of the park was also off-limits to self-drivers until 2014, and it’s only recently that all can enter and leave through Galton Gate and enjoy the scenery and 15-plus waterholes in the area. This means there is simply less traffic, and more peace.

The West offers different vistas and biomes to the east and central areas—the most obvious being that the landscape is not as flat at a pan(cake), and the soil not all chalky white but reddish. There are hills, like the ridges around Dolomite camp that gave it its name, and these are more wooded, with fewer mopane and more other species such as moringa and star chestnut. Plains game plus elephant frequent the woodlands and savanna surrounds. There are also patches of sandy acacia shrub. When driving, mopane takes over from the grasslands after Ozonjuiti m’Bari waterhole, (it’s the most common tree in Etosha, making up 80% of all trees!). The region is less of a hot spot for predators, but lion are certainly seen: as always, sightings come down to luck (or a good guide). One resident pride is known as the Rateldraf pride; the name refers to the determined, fearless gait of the honey badger – known to fight back when persecuted by lion. Otherwise, more unusual species that frequent this side of the park include Hartmann’s mountain zebra, black-faced impala and brown hyena. It’s also of special interest to botanists, with many unusual species magically sprouting after rains.

Photographers and authors Mario and Jenny Fazekas recommend the area during summer too, as “this hilly western part of Etosha is used by wildlife as a retreat during the wet season”. Certain waterholes on this side have been closed for various management reasons, including fighting poaching (some holes were very close to the boundary fence), so ask at the camps for the latest news.

The unfenced NWR eco-camp Dolomite is on a wooded ridge of hills and has lovely views, an infinity pool and restaurant, and 20 chalets (three deluxe options have a plunge pool, robe and slippers and a deck). The furthest chalets, by the way, are accessed via a steep incline, less fit guests will be puffing. A golf buggy is supposed to solve this issue, but isn’t always around when needed. The nearest waterhole is Dolomietpunt, just below the ridge (where cheetah have been seen drinking in the very early mornings, as in from 4am). Klippan, to the north, is known for both black and white rhino; Rateldraf is probably where the Rateldraf lion pride got their name and yes, they like it here. Giraffe enjoy it too, and photographing them drinking with legs akimbo, a series of straight lines and triangles, is a total treat. Nomab is scenic and can draw birds of prey, including vultures. The Fazekas also recommend the stretch between Okawo, a natural spring, and Duiukerdrink for a variety of game and birds of prey. 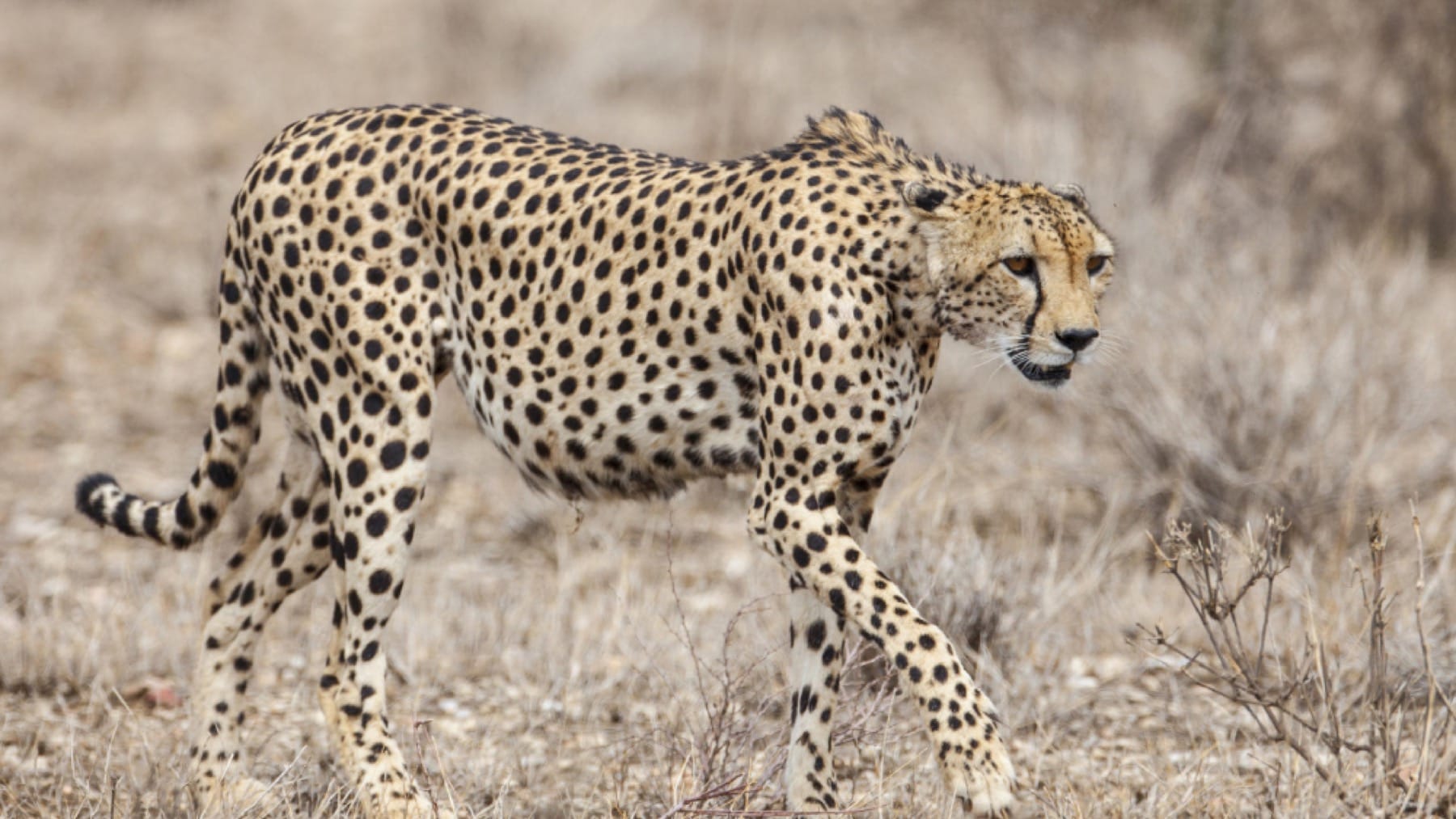 The campsite, Olifantsrus, may suit hardy travellers and the 10 sites accommodate a maximum of eight people each. It is safely fenced! Otherwise, as with many reserves, recommending who will enjoy this section over others can be tricky. It is less child-friendly, and distances can be daunting, but it is an easy self-drive destination for solos, families and couples and there is not as much pressure to be fully equipped for vehicle break-downs as is the case in other wilderness areas in Africa. Guided tours that often visit other key attractions, as well as Etosha, are an excellent option for those who prefer to hand over all worries once stepping off the plane. Guides can help locate animals in all seasons. The eco-camp accommodations will suit couples and solo travellers but those seeking more space and exemplary service may wish to stay outside the park.

A hide with height The Olifantsrus campsite has a relatively new hide, a double-story delight that photographers grumble faces into the sun, but certainly gives good views of animals coming to the water to drink. The lower section offers a bird’s-eye view of the game, and the upper story adds height. One Tripadvisor reviewer writes about being eye-to-eye with an elephant bull, which then sprayed the windows with water! Mario Fazekas describes a piece of interesting Olifantsrus history: “Olifantsrus camp is built around the remains of the old elephant abattoir and guests can see where the elephants were slaughtered, hung, skinned and dried. There is a small museum documenting these dark days of culling.” Happily, elephants now go unmolested here. The Etosha elephants are large, but have stubby tusks on the whole, possibly due to a lack of minerals or gradual hereditary change (big tuskers had it tough in Namibia back in the day). Note that day visitors to Olifantsrus are charged a fee to visit the hide or picnic site.

On the wing South African-based birding guru Ian Sinclair describes Etosha as “the star on the crown of the whole of Namibia”. Summer is when avian action is in full swing. The central area around Halali is a great spot to seek out the noisy Bare-cheeked Babbler and Violet Wood-hoopoe, Swallow-tailed Bee-eaters as well as lovely little predators like Red-necked Falcon. But the West has its specials too: the dolomite hills are home to various near-endemics and specials. A guide from Lawson’s Birding, Wildlife and Custom Safaris suggests searching for Hartlaub’s Spurfowl, Monteiro’s Hornbill, White-tailed Shrike, Rüppell’s Parrot, Rockrunner, Violet Wood-hoopoe, Bare-cheeked Babbler, Chestnut Weaver, Yellow-throated Sandgrouse, Pallid Harrier, Montagu’s Harrier, Red-necked Falcon and Carp’s Tit. Less avid birders will be pleased to hear owls, eagles and vultures can all be seen.

It is possible to combine the best of two worlds: Spend hours at some of Etosha’s most desirable waterholes, ticking off a Noah’s Ark-sized list of species – and…

African elephants that have become accustomed to the relentless cycles of drought in Etosha and map its water sources in their memories. From just 26 in 1954, their…

There’s a reason so many couples choose a safari for those extra special occasions. So much about the experience sighs with romance: deep, dark night skies washed in…

Namibia is one of Africa’s easiest safari destinations to visit. Self-catering is possible (although be sure to book accommodations that have a kitchen with crockery and…

The peak of the rainy season. Vegetation will be as lush as it gets in Etosha for the next month or two – which makes game viewing more challenging. If the rains have…

Peak season in terms of weather, international tourist numbers and waterhole action. August seldom sees a drop of rain, and average temperatures are rising: highs are…