Long before GPS was invented, the sailors of old returning from long sea voyages to the east confused this picturesque bay with the more famous Table Bay a bit further along the coast, thus giving False Bay its name. 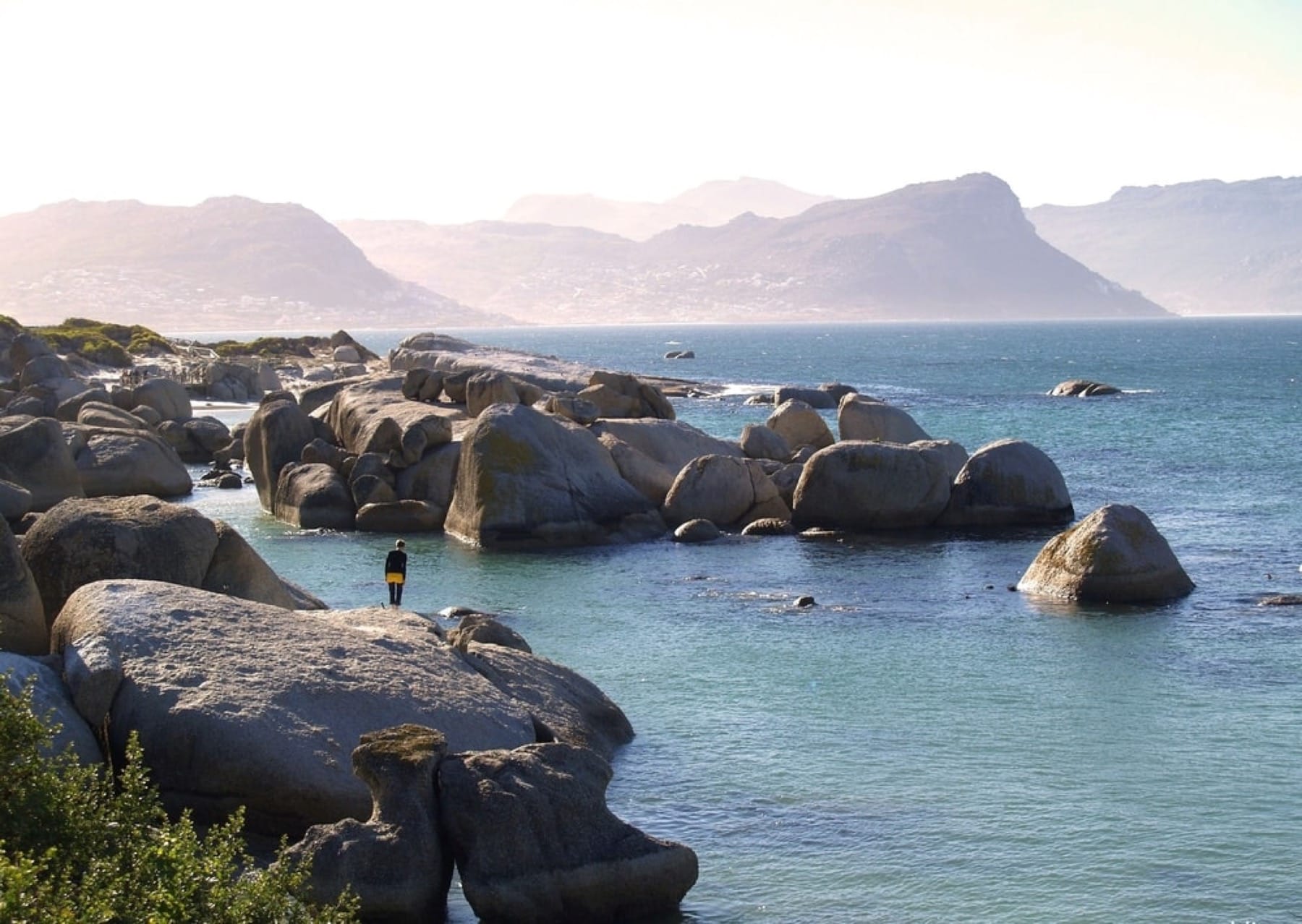 False Bay is an immense C-shaped curve in the coastline to the southeast of Table Mountain. At its widest point it is a staggering 30km across the bay! It comes as no surprise then that the bay is littered with numerous long sandy beaches, some of which have managed to escape any form of urban development. 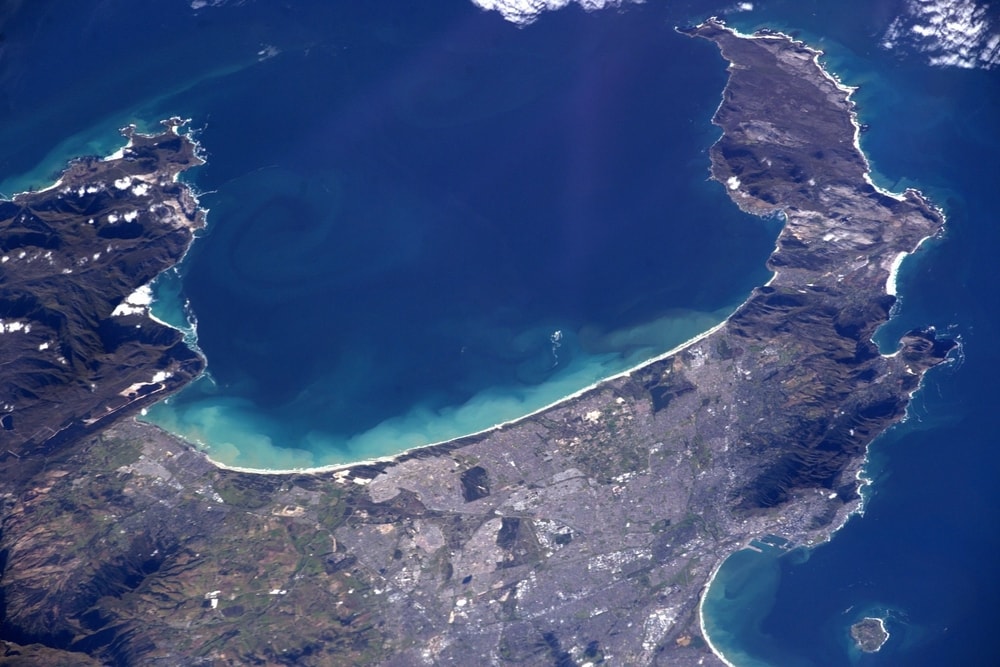 Tucked in the western corner of False Bay lies the quaint fishing village of Kalk Bay. Its harbor is a popular destination not only due to some excellent seafood restaurants but also for the local fishermen who sell their catch of the day straight off the boat. There are even a few resident Cape fur seals that have formed a unique bond with the fishermen, often posing together for photographs. On Kalk Bay’s main road is a fabulous assortment of art galleries, vintage bookshops, antique dealers and superb restaurants. 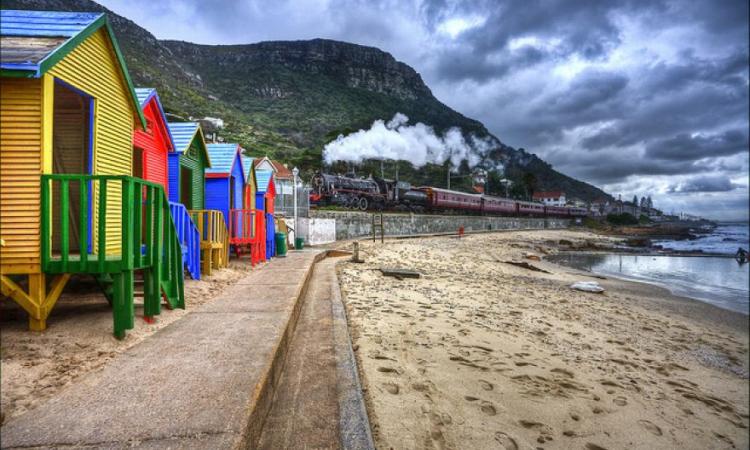 A few minutes up the road from Kalk Bay is the epicentre of Cape Town’s surf scene, Muizenberg. It is known for being a great training ground for anyone learning to surf and thus draws adventurous souls of all ages. Naturally, a laid-back surf culture exists in town and you’ll get a feel for the vibe on Surfer’s Corner, a seafront strip lined with restaurants, pubs and surf shops.

From Muizenberg, the beach runs uninterrupted for 40km along the inner curve of Table Bay, all the way to the Helderberg region which includes the towns of Somerset West, Strand and Gordon’s Bay. Somerset West, situated inland, is often seen as an off the beaten track destination with several hidden-gem wine farms. While Strand is the commercial hub of the area, Gordon’s Bay offers some small, yet scenic family-friendly beaches.

• Muizenberg is regarded as one of South Africa’s top surfing spots since it has a very consistent swell, especially in the winter months. Conditions cater to all skill levels and several surf schools offer lessons for young and old.

• Clarens Drive on the R44 road between Gordons Bay and Rooi-Els is a stunning coastal drive. The narrow 21km-long pass snakes along the coastline between the Atlantic Ocean and the towering Hottentots Holland mountains, offering spectacular views along the way.

• Humpback, Bryde’s and Southern Right whales can be seen in False Bay during the late winter months when they migrate north to warmer climates.

• A visit to the Kalk Bay harbor is a must. It’s a tradition to eat fish and chips here and watch the resident seals interact with the fishermen.

• The Cheetah Outreach, a conservation initiative in Somerset West, offers the opportunity to get up close and personal with the fastest land animals on the planet.

• By car, the western side of False Bay is about 50 minutes by car from Cape Town city center while the far eastern end (Rooi-Els) is 1h30 by car.

• Public transport in False Bay is limited, therefore it is recommended to rent a vehicle if you intend to spend much time in the area.

Explore Cape Town and its surrounding highlights in luxury on a looped route that both starts and ends in South Africa’s Mother City....

The Victoria and Alfred Waterfront, situated in the oldest operating harbor in Africa, is the most visited destination in all of South Africa. The waterfront attracts a…

Imagine if you could escape with a loved one to a place where you can watch the sunrise from the top of a mountain before having breakfast in Africa’s oldest harbour. You…

Cape Town’s City Bowl gets its name from the natural amphitheatre shape created by the slopes of Table Mountain and the towering peaks on its flanks, called Devils Peak…

The Atlantic Seaboard is a narrow band of suburbs sandwiched between the Table Mountain range and the Atlantic Ocean on Cape Town’s western coastline. The area’s proximity…