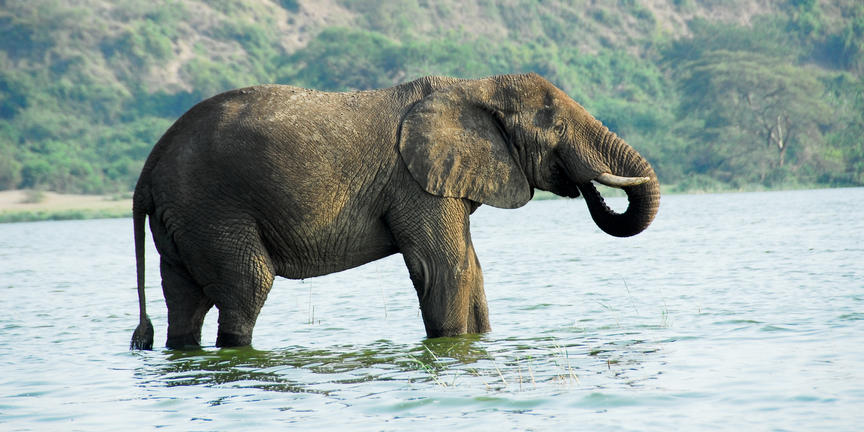 Queen Elizabeth National Park, the second largest and most biodiverse park in Uganda, is the country’s most popular safari destination. Located in western Uganda close to the Rwenzori Mountains, the park encompasses a huge array of different landscapes, including wetlands, swamps and crater lakes, tropical forests, woodland and open savannah, which support a diverse range of wildlife, from 95 mammal species (including 20 carnivores and 10 primates) to more than 600 species of birds. The list of highlights includes easily spotted elephant and buffalo, Ugandan kob, sitatunga, giant forest hog and topi – while at the top of the list are the tree-climbing lions found in the south of the park. In addition to game drives on the open savannah, you can also do boat cruises to see hippos and crocodiles and hike through rainforest to find chimpanzees.

Lions are only found climbing trees in two places in Africa, so it’s a rare and remarkable sight to see them lying in the branches of giant fig and acacia trees in the remote Ishasha Sector at the southern end of the park. 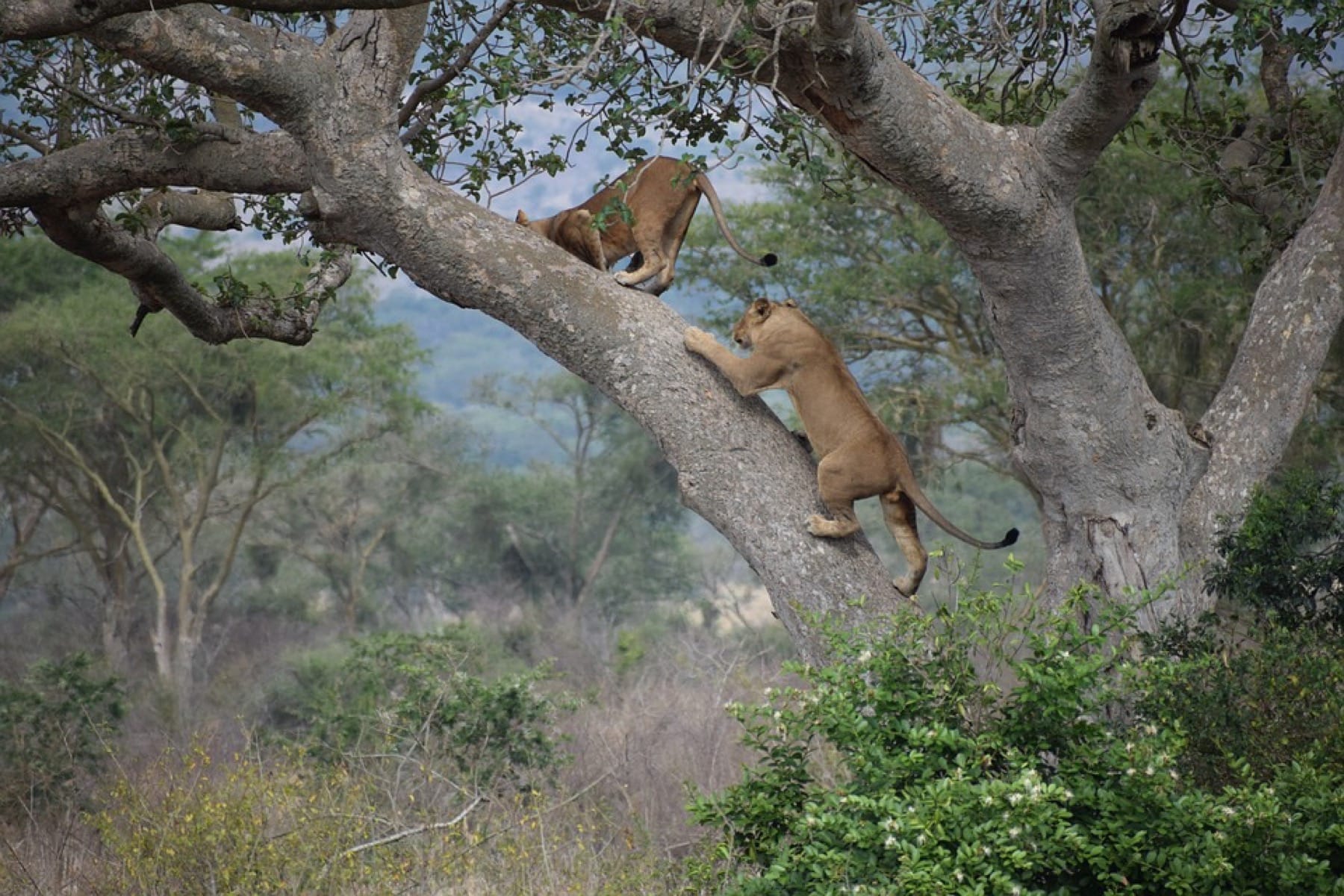 Boat safaris on the 34-kilometre-long Kazinga Channel, which links Lake Edward and Lake George, are a highlight of any visit to Queen Elizabeth National Park. As you cruise past beautiful scenery, your sightings of hundreds of hippos and crocodiles are guaranteed, while there are plenty of chances to spot elephant, buffalo, lion and leopard as well as birds such as kingfishers and fish eagles.

In the far east of the reserve, the Kyambura Gorge, which is also known as the Valley of the Apes, has steep slopes covered in rainforest which is home to black and white Colobus monkeys, olive baboons, red tailed monkeys, giant forest hogs and a host of forest bird species, but the star attraction here are the habituated chimpanzees, which you can track down on a guided hike. 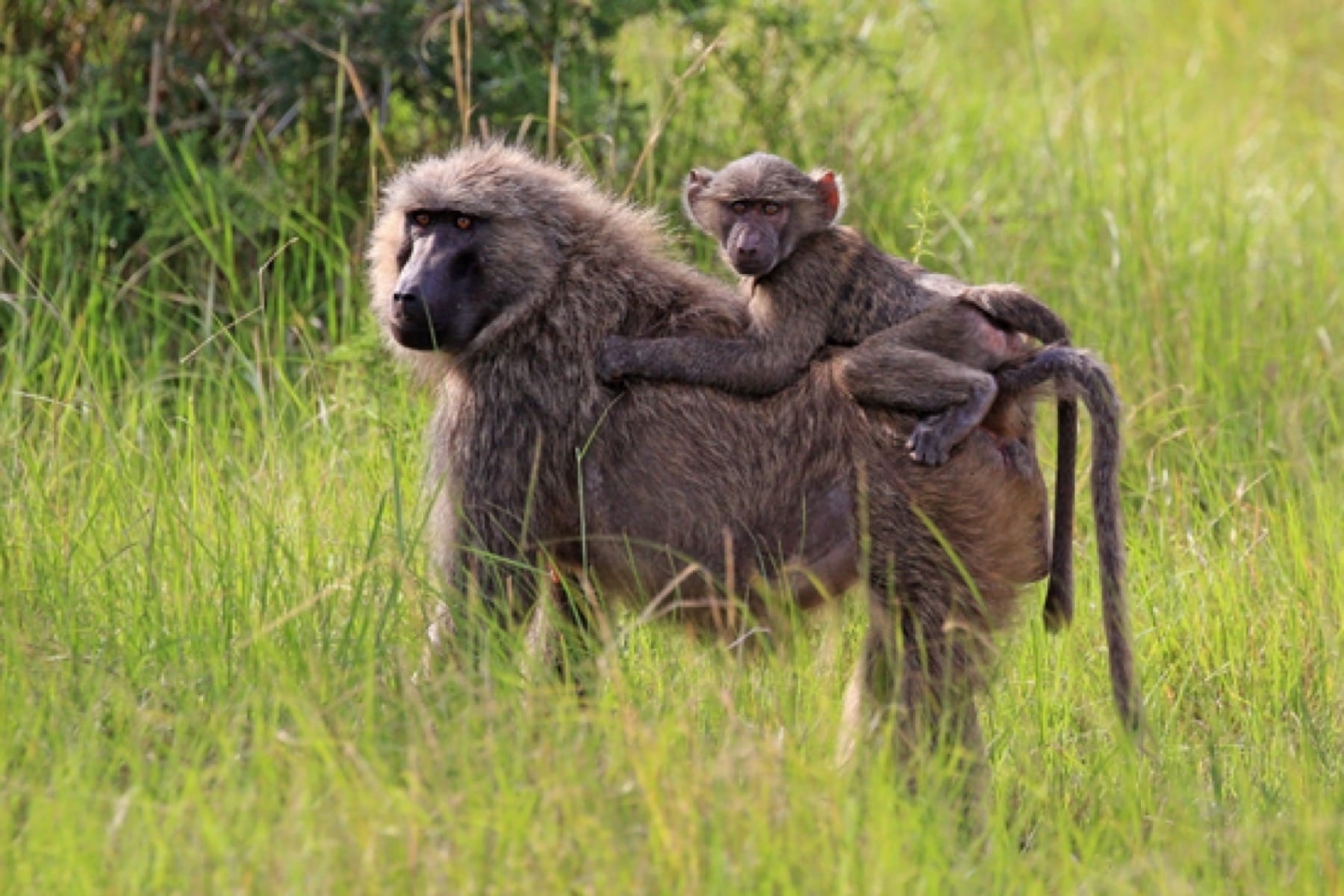 With more than 600 species of birds, Queen Elizabeth is recognised as one of East Africa’s best birding destinations, and for sheer numbers it wins out much larger safari parks in other countries. Standouts include more than 50 different raptors, a huge variety of water birds and diverse forest species, while the elusive, sought-after shoebill stork can be searched for in the swamps of the Ishasha Sector.

For your holiday in Uganda, you should get comprehensive travel insurance that covers all medical emergencies and includes activities that you plan to do, such as gorilla…

A relaxed holiday in Uganda

Travelling by road in Uganda can feel like a hassle – distances are deceiving, as the rough road conditions mean that it takes a long time to travel between…

August is another excellent month to visit southern Uganda. Falling at the end of dry season, August is a great time for gorilla tracking, and there’s superb wildlife…

Credit: RoadTrip Uganda As with many safari destinations, if you want to save money on lodging on your holiday in Uganda, choose to stay at hostels and campsites…

After April, November is the second wettest month in Uganda. Few tourists visit this month because it’s difficult to spot wildlife in the national parks (and some…

The recommended vaccinations for Uganda include: tetanus, diphtheria, polio, hepatitis A, typhoid, cholera, hepatitis B, meningitis and tuberculosis. The rabies…