Northern White Rhino - Can science save the rhino from extinction?

There are only 7 northern white rhino left in the world and conservationists are worried about the future reproduction of the world’s rarest large mammal.

The reason for the decline in the population is attributed to hunting, poaching, and loss of habitat. 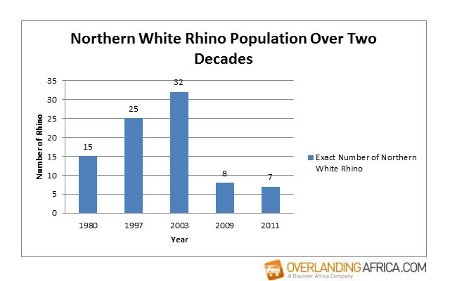 The white rhino can still be seen in the Kruger National Park.

Until 2009, the last eight northern white rhinos lived in two zoos in Europe and the USA. On December 20, 2009, four of the last eight were moved from Dvur Králové Zoo in the Czech Republic to Ol Pejeta Conservancy in Laikipia, Kenya. (See video below)

“They are listed as critically endangered on the IUCN Red List of Threatened Species and are thought to be extinct in the wild. Moving them now is a last bid effort to save them and their gene pool from total extinction.” Said Dr Rob Brett, Africa Regional Director at Fauna & Flora International, and member of the IUCN African Rhino Specialist group.

Above: The northern white rhino is categorised as ‘critically endangered’ by IUCN Red List.

While in captivity, the survival rate of northern white rhinos are good, but reproduction rates are extremely low. The four rhinos were relocated back into the wild in hope of bringing about successful mating. Many said that the operation would put the animals at risk because they had spent so long in protected conditions and they would not be used to the harsh African environment.

Members of the European Association of Zoos and Aquaria stated that they didn’t think that “any significant conservation benefits will happen,” from the placement of the rhino back in the wild and in March 2011, they were almost correct. Just over 15 months of being released into the central Kenyan highlands and the northern white rhino’s began ‘mating’ activities. This behavioral change served to confirm that the four rhino had shed their non-procreational coexistence that they adopted while living in captivity and had now returned to the way nature intended it. Although the rhinos have been mating since in Africa, there have not been any offspring which have resulted from intercourse.

However, with recent technology, it seems that all hope is not dead in losing the rare strain of the rhino’s gene. With the use of stem cell development it may be possible to produce the northern white rhino from a test tube.

Director of Genetics at San Diego Zoo's Institute for Conservation Research, Dr. Oliver Ryder says: “The greatest contribution this technology might make is to prevent extinction by using stem cells to assist with rescuing the genetic variation in increasing the reproduction of a critically endangered species.”

The video below outlines the possibility of using science effectively to save the northern white rhino:

The following organisations have invested time, money, effort and have proved highly dedicated to restoring the northern white rhino:

It seems that a combination of conservation effort, anti-poaching legislation and scientific brilliance, the world will never have to lose one of its precious species’ again. Quagga, we miss you.

Be one of the few to see the the remaining seven northern white rhino, with a trip to Kenya.