Deborah Kiener and her partner Steven, who are both first time African explorers from Zurich (the largest city in Switzerland, started 2015 with a safari to Botswana’s Okavango Delta from Cape Town, South Africa. 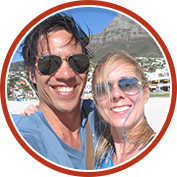 After watching so many documentaries on TV about the Okavango Delta, Deborah and Steven shared the same travel dream of exploring Botswana.

This was their first visit to Africa, and their intentions were to go to one of the best wildlife destinations in the world - where leopards, elephants, lions, cheetah, hippos, and hyena roam free. That definitely sounds like Botswana.

After an 11 hour flight from Zurich to Cape Town, Deborah and Steven finally touched down on African soil. Their first stop was Long Street Boutique Hotel situated on Cape Town's popular Long Street strip, famed for its vibrant nightlife and extensive restaurant selection.

After spending two nights in Cape Town, Deborah and Steven were ready to leave the lively atmosphere of the Mother City behind them and venture into the tranquil surrounds of Africa's wilderness.

Steven and Deborah take a selfie in Cape Town

Deborah and Steven hopped onto a flight at Cape Town International Airport and headed to Maun. Maun is a small town in Botswana that serves as a tourism hub for further travel into the country.

Arriving in the Okavango Delta after a flight from Maun

Upon arrival in Botswana, they found themselves on another flight, this time on a small airplane to the Pom Pom airstrip in the Okavango Delta. Collected in a jeep by their safari guide called ‘Gift’, Deborah and Steve were transferred to Xaranna Okavango Delta Camp for a three night stay.

Deborah and Steven were overwhelmed by the welcome they received at Xaranna, in fact, they felt like celebrities! The entire camp crew introduced them in African song and dance. After a welcome drink, they were introduced to their own personal butler as well as all the staff and shown to their room.

A lion yawns during a game drive in the Okavango Delta

According to the couple, the lodge was very romantic, and the pool in the middle of the wilderness was absolutely stunning. They were blown away by the service they received at the camp, in fact, Deborah thinks that the staff could read her wishes just by looking into her eyes!

"Deborah and Steven were overwhelmed by the welcome they received at Xaranna, in fact, they felt like celebrities!"

One of the highlights Deborah and Steven experienced at the Xaranna Okavango Delta Camp was the romantic evening arranged for them by the staff. It started with a bubble bath with rose petals scattered around it and afterwards, they were greeted with champagne and escorted to the pool area where a dinner table was set up for them, surrounded by 100 candles!

Deborah and Steven loved the privacy they had during their game drives, sharing the experience with just one other couple and very few other vehicles around them.

A couple of zebra grazing in the Okavango Delta

An elephant watches through the reeds in the Okavango Delta

Their stay at the Xaranna Okavango Delta Camp came to an end with a flight to the Chitabe Airstrip for the next leg of their Botswana safari.

Sundowners after a game drive in the Okavango Delta

Deborah and Steven spent the next four nights at Sandibe Okavango Safari Lodge, tucked away on a private concession in the Okavango Delta. Here they enjoyed wonderful wildlife encounters which included a visit from an elephant, a lion and a leopard close to their camp. There was nothing to worry about though, as lodge security made sure the couple were safe and informed at all times.

During a game drive near the Sandibe Okavango Safari Lodge (lead by an experienced guide) , Deborah says a leopard and her little one came close to their safari vehicle, which was one of the most amazing safari experiences of their time in the Okavango Delta. They also managed to see giraffes eating from the highest trees!

A giraffe couple during a game drive in the Okavango Delta

Leopard hiding away from the camera in a tree

Deborah and Steven said goodbye to the Okavango Delta and soon found themselves back in Cape Town, this time at the 2inn1 Kensington, a stylish little boutique hotel near the towering Table Mountain and the distinctively shaped Lion’s Head mountain.

They spent the next three nights here and Deborah loved the service they received - apparently the staff was very accommodating and the breakfast buffets were excellent.

Drinks during a boat trip in Cape Town

The couple's final night stay of their Okavango Delta and Cape Town holiday was spent at the Angala Boutique Hotel and Guesthouse, nestled in the heart of the Cape Winelands region.

It was here that Deborah and Steven enjoyed what they claim to be the best meal of their entire holiday - at the Le Bon Vivant restaurant in Franschhoek. According to Deborah, the food was perfect and the dessert platter was even better!

Horseback riding in the Cape Winelands

The couple's final activity was a horseback ride through the Cape Winelands before bidding Africa farewell as they boarded a plane, heading home to Switzerland.