Ania and Thomas's Tanzania Safari Route Map Ania and Thomas Pustelnik, a Swiss couple from Zurich spent Christmas and New Year on the Serengeti Plains in Tanzania. Ania and Thomas’s 12 day Tanzania safari - which started on 22 December 2014 and ended on 3 January 2015 - was an experience which they say,…

Ania and Thomas Pustelnik, a Swiss couple from Zurich spent Christmas and New Year on the Serengeti Plains in Tanzania.

Ania and Thomas’s 12 day Tanzania safari - which started on 22 December 2014 and ended on 3 January 2015 - was an experience which they say, they’ll never forget. This is how their trip unfolded. 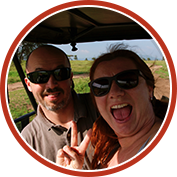 Thomas and Ania have been travelling to Africa for over 15 years now and Tanzania has always been their favourite safari destination. In fact, they come back every three years!

Why do they keep coming back? They absolutely love the Ndutu region - where Ania says they’re allowed to drive off-road so that they can get closer to the wildlife (with the help of a professional safari guide of course!). They simply love Tanzania’s countryside and meeting the friendly locals - two elements they say give them the feeling they're experiencing authentic Africa!

Ania and Thomas arrived at Nairobi Airport just after 7 pm and soon found themselves on another flight heading to Kilimanjaro which departed at 10 pm. Soon after their arrival in Kilimanjaro, they were transferred to the Machweo Retreat situated in Arusha, a city based in Northern Tanzania.

The couple spent the entire second day relaxing and rejuvenating at the Machweo Retreat’s luxurious spa and wellness facilities, preparing themselves for the next part of their Tanzanian safari.

Ania and Thomas spotted this big herd of elephants crossing the road during a game drive in the Ndutu area, not too far away from the Lemala Ndutu Camp.

Thomas saw this Leopard eating his dinner in an Acacia tree in Ndutu area. The leopard took a moment to acknowledge Ania’s ‘paparazzi’ antics!

Ania and Thomas said goodbye to the Machweo Retreat and spent the morning of the third day on a guided tour of the Kimemo Coffee Farm plantations, which was followed by lunch. They were then transferred to the Ngorongoro Farm House, a cosy lodge which faces the Oldeani Volcano, and their home for the next two nights.

Day four was all about exploring! Ania and Thomas went out on game drives in the Ngorongoro Crater - a deep, volcanic crater which is the largest unflooded and unbroken caldera on the planet. It’s also home to an estimated 30,000 wild animals!

The couple saw a small part of the annual wildebeest migration going through the Ndutu area. Ndutu is the area where the migratory wildlife gives birth to their offspring.

“We've been travelling to Africa for 15 years, but Tanzania is our absolute favorite for safari - the countryside, the people and the true African feeling!”

Ania and Thomas drove past a tower of Masai giraffes in the central Serengeti.

Ania and Thomas spent the next three days (over Christmas) at the Lemala Ndutu Tented Camp, located at the edge of a permanent marsh in the Ngorongoro Conservation Area.

Here, they enjoyed full-day game drives, exploring the Ndutu region, notoriously known as the base for the great wildebeest migration during calving season, a period where the migratory wildlife give birth to their offspring - attracting hungry predators such as lion, leopard and cheetah looking to pounce on the vulnerable calves!

On this hot day, the Swiss couple saw a big pride of lions (six lionesses, nine cubs and one male) during a game drive in central Serengeti.

Thomas said that the pride spotted a herd of zebras and were ready to hunt, but the zebras were spooked away by an oncoming game vehicle.

"We loved the Lemala Ewanjan Camp, it’s a great location situated on the Makoma Hill, with fantastic view of the African Acacia trees!"

Inside the Lemala Ndutu Camp.

Ania and Thomas rang in 2015 at the Lemala Ewanjan Tented Camp situated within the game-rich Seronera Valley, located in a secluded part of Central Serengeti.

The full-day game drives continued here, this time exploring the Rock Kopjes, where they saw some of the big cat families. Cheetah and lion use these giant rock outcrops as observation posts, looking out for a possible meal.

The patio area at the Lemala Ewanjan Camp, situated in the Seronera area of the Serengeti National Park. Thomas and Ania celebrated New Year here.

The couple saw these three cheetah cubs playing in Ndutu. Ania took this picture after the mother cheetah successfully hunted down a Thomson’s gazelle!

Kicking off New Year, the couple left on an early morning departure from the Lemala Ewanjan Tented Camp on a safari drive through the Ngorongoro Conservation Area towards Gibbs Farm, which overlooks the centuries-old Great Rift Valley and Ngorongoro Forest, for a late lunch.

Ania and Thomas spent the rest of the day relaxing, enjoying the different farm activities and the lush gardens.

Thomas and Ania saw another cheetah family during their eventful game drive in Ndutu, this time spotting a mother with two bigger cubs.

"The food at Gibbs Farm was delicious and of the finest quality! Everything was fresh and they had a tasty menu... all of this in the middle of the bush!"

Ania says these zebras caused quite a traffic jam on the road in the Ngorongoro Crater.

The couple had a quick breakfast at Gibbs Farm before heading back to Arusha, the place where their safari started.

The Arusha Coffee Lodge was Thomas and Ania’s home for the final few days of their trip, but there was still time to experience the sights and sounds of Arusha town, before heading back to Kilimanjaro Airport to catch their connecting flight back home.

Thomas and Ania take a selfie during a game drive in the Serengeti National Park.

If you're thinking of going on your own Tanzania safari check out this video below;