Wildlife in the Ngorongoro Crater 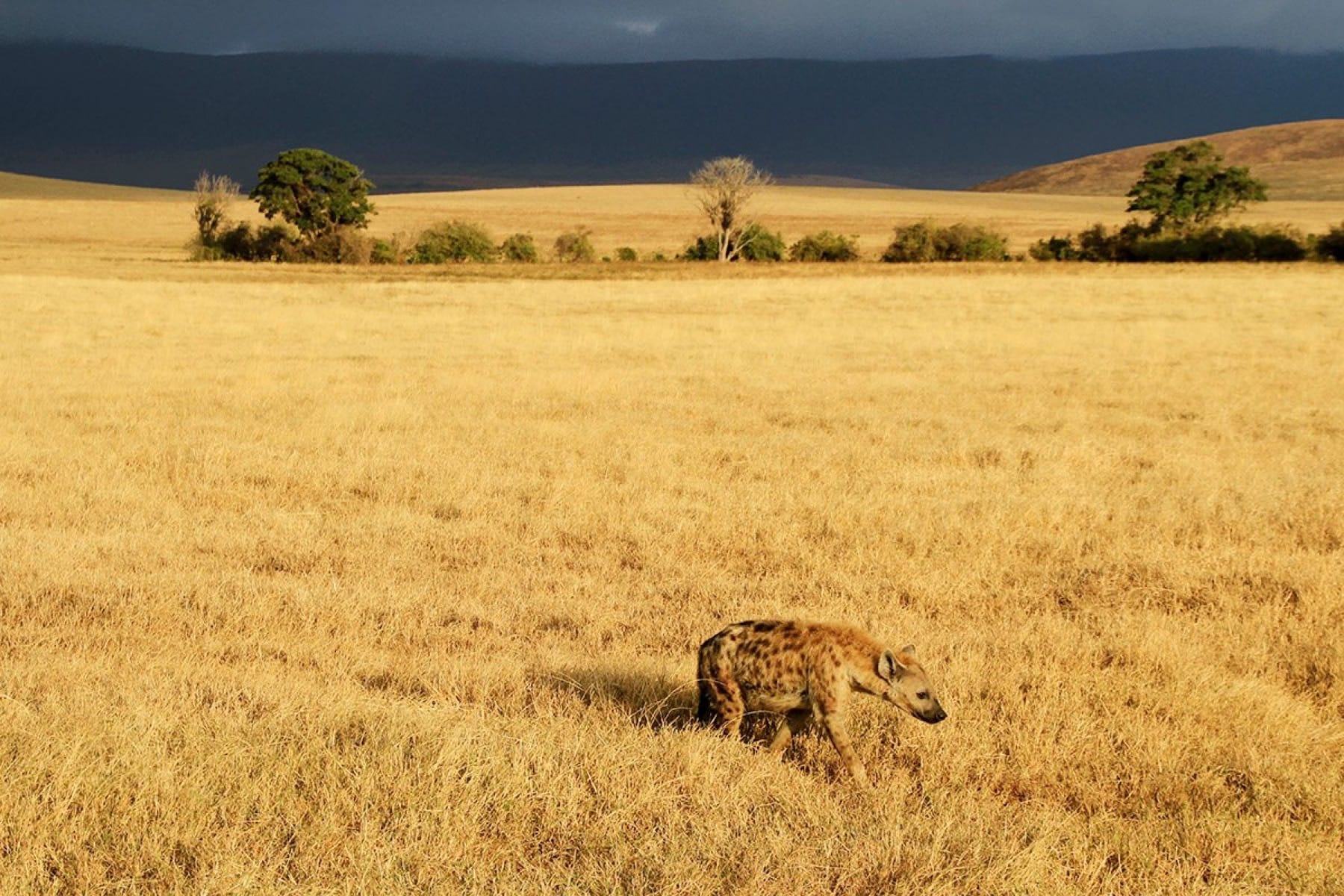 The game viewing centre piece of Ngorongoro Conservation Area is the grassy floor that stands at an altitude of 1,800m. The crater is dominated by a cover of open savannah that looks lush and green during the rainy season but is altogether dustier and more windswept during drier months. Important micro habitats within the crater floor include the fever-tree forest at Lerai, the shallow saline Lake Magadi, the lush reed-fringed Gorigor Swamp, and a permanent hippo pool fed by Ngoitokitok Springs.

The open grasslands of the crater floor is home to immense concentrations of grazing antelops all year through, with numbers peaking between December and May, the main rainy season. Most common are blue wildebeest and Burchell’s zebra, resident populations of which are estimated at 10,000 and 5,000 respectively. Wildebeest and zebra are commonly seen together and/or in the company of other grazers such as the diminutive Thomson’s gazelle, the larger and longer-horned Grant’s gazelle, and the rather doleful looking topi and Coke’s hartebeest). Other less numerous antelopes include the handsome Defassa waterbuck (which differs from the common waterbuck in having a redder tinge to the coat and a full white rump), the secretive bushbuck, and the massive eland, all of which are most commonly seen in the vicinity of Lerai Forest or swampy areas.

The crater floor supports significant populations of all the Big Five. Most commonly the African buffalo, large herds of which are often seen marching across the crater floor in search of grazing or water. Least likely to be seen is the leopard, which is resident on the crater floor, but only in small numbers due to a lack of suitable habitat, and tends to be retiring and secretive.

Ngorongoro Crater serves as something of a retirement ground for old elephant bulls, many of which sport outsized tusks to dimensions now seldom seen in parts of Africa that have suffered from commercial poaching in recent decades. Lerai Forest and the nearby Gorigor Swamp are the favoured haunt of these mighty male tuskers, up to 70 of which are resident at any given time. Oddly, no elephant breeding herds are resident on the crater, though females and family herds do pass through from time to time. 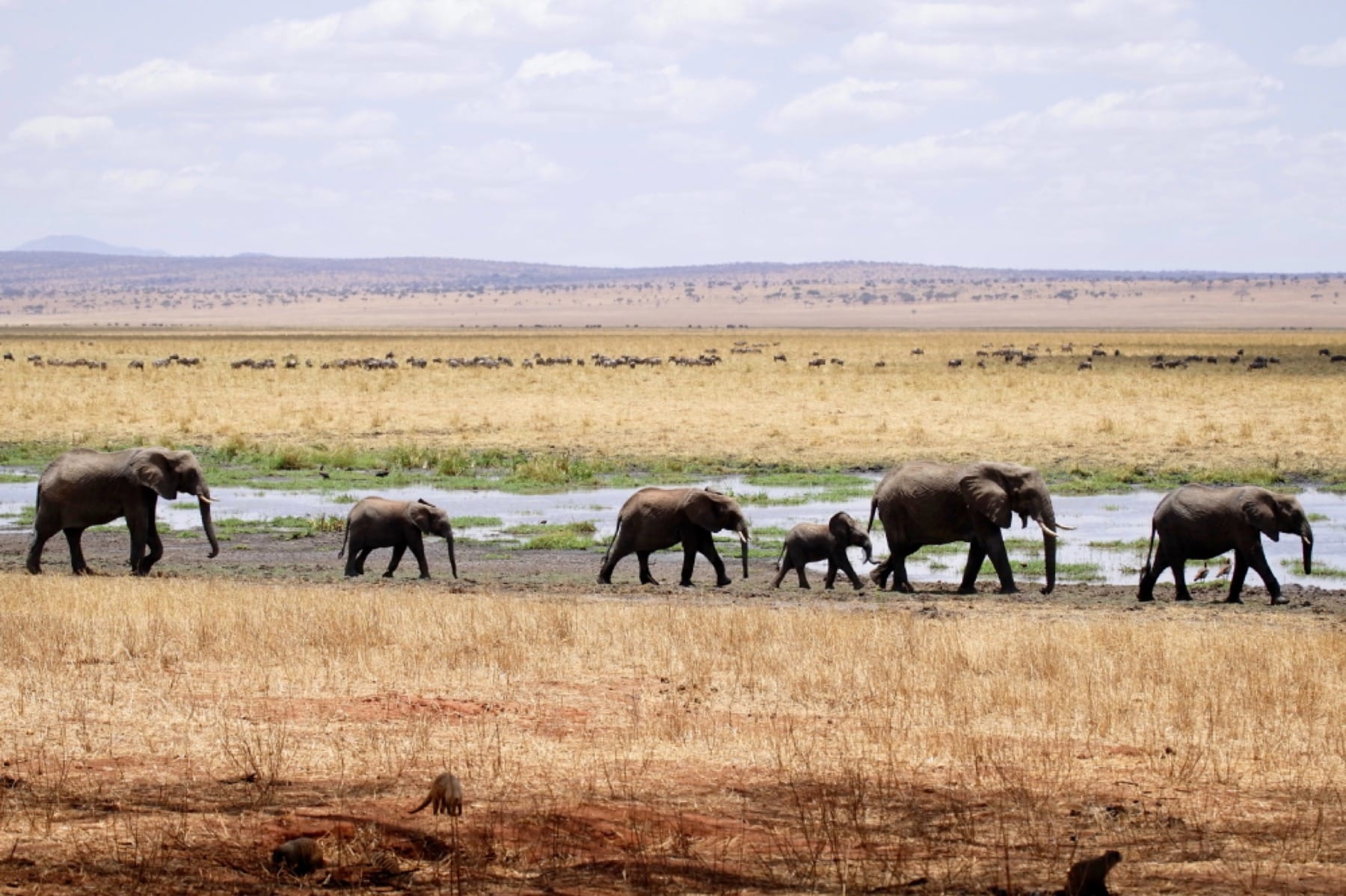 Ngorongoro Crater is one of the best places in East Africa to look for the black rhino, an endangered species with a very restricted presence in Tanzania. Between 1964 and 1992, the crater’s resident population of these cumbersome beasts decreased from an estimated 100 individuals to no more than 10 as a result of poaching. Since then, the local rhino population and the diversity of the gene pool has been boosted by the introduction of several individuals from South Africa, though the authorities are reluctant to publicise actual numbers. All the crater’s rhinos have been fitted with a tracking device in their horns, in order to monitor their movements and to discourage poachers. They tend to range between the Lerai Forest and Lake Magadi, browsing in the latter by night and then moving into more open terrain by day. Their unusually pale coloration is attributable to a predilection for bathing in saline Lake Magadi and rolling in the fringing salt flats.

The floor of Ngorongoro Crater reputedly supports Africa’s densest concentration of lions, with up to 100 individuals present in suitable conditions. That said, lion numbers do fluctuate somewhat, due to a combination of disease (the closed nature of the crater makes its inhabitants particularly vulnerable to epidemics), emigration from and immigration to the surrounding highlands, and occasional pride takeovers that often result in the new dominant male killing all unrelated cubs and adolescents. It would be unusual to spend a day in the crater and not see any lions, which are generally very relaxed around vehicles, though they might be encountered just about anywhere so it is difficult to predict where you might find them. 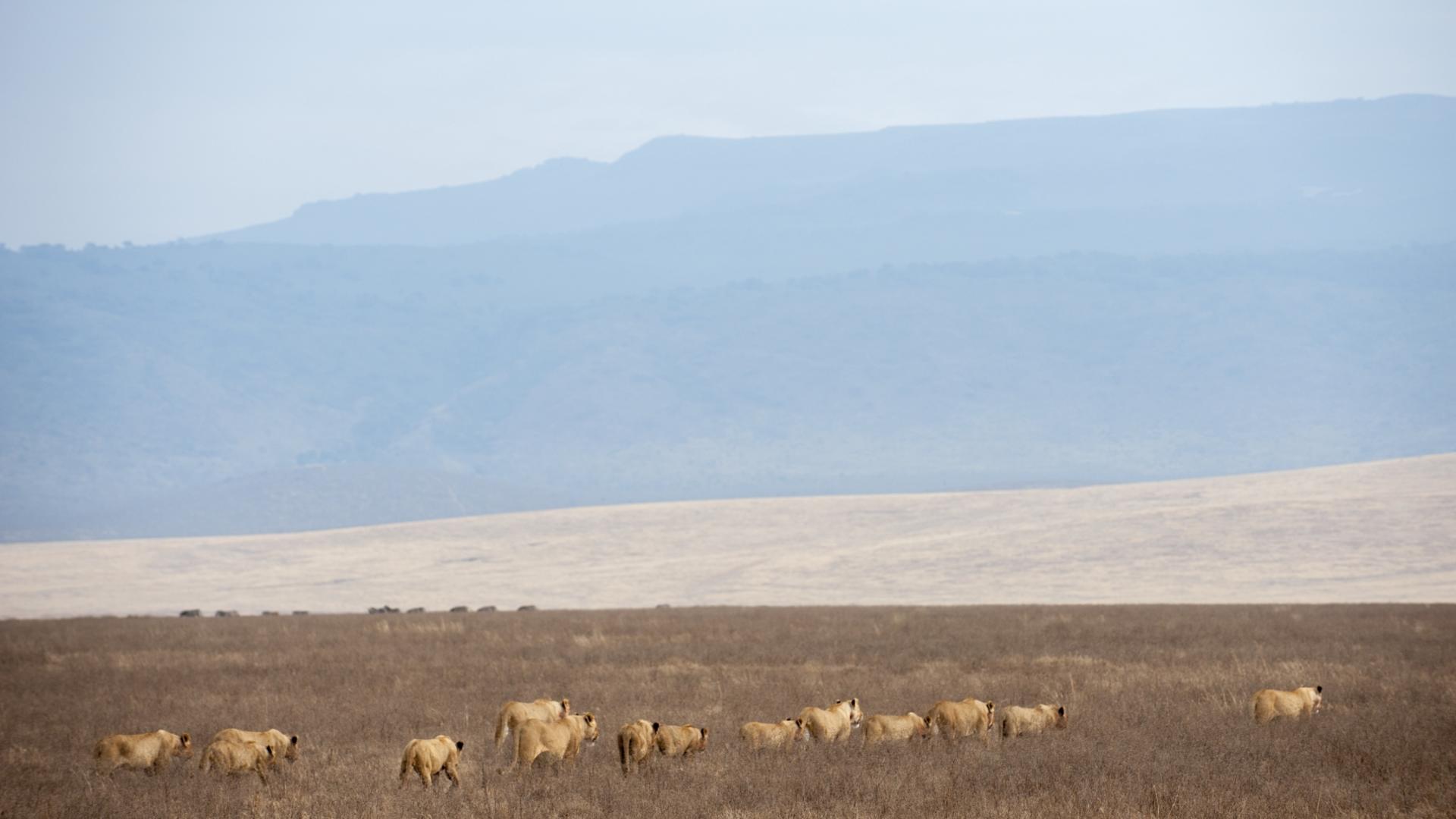 Other predators are well represented too. Most populous is the spotted hyena, which is Africa’s second largest carnivore after the lion, and tends to be less dependent on scavenging than is popularly assumed. An estimated 400 individuals are resident in the crater, so you are unlikely to spend long there without stumbling across one. If you specifically want to seek out a hyena, head to the eastern shore of Lake Magadi, where they often rest up during the day, occasionally trying to sneak up and snack on the flamingos that flock the shallows.

The open grasslands of the crater floor are the perfect cheetah habitat, and there are also plenty of small antelope for these feline speedsters to feed on, so it’s a bit surprising that none were present as recently as the 1990s. The most likely explanation for this is competition with the dense populations of lion and spotted hyenas, both of which will routinely chase a cheetah off a fresh kill. Since 2000, however, cheetahs have recolonised the crater floor and they are now quite commonly seen stalking through the plains in search of gazelle. 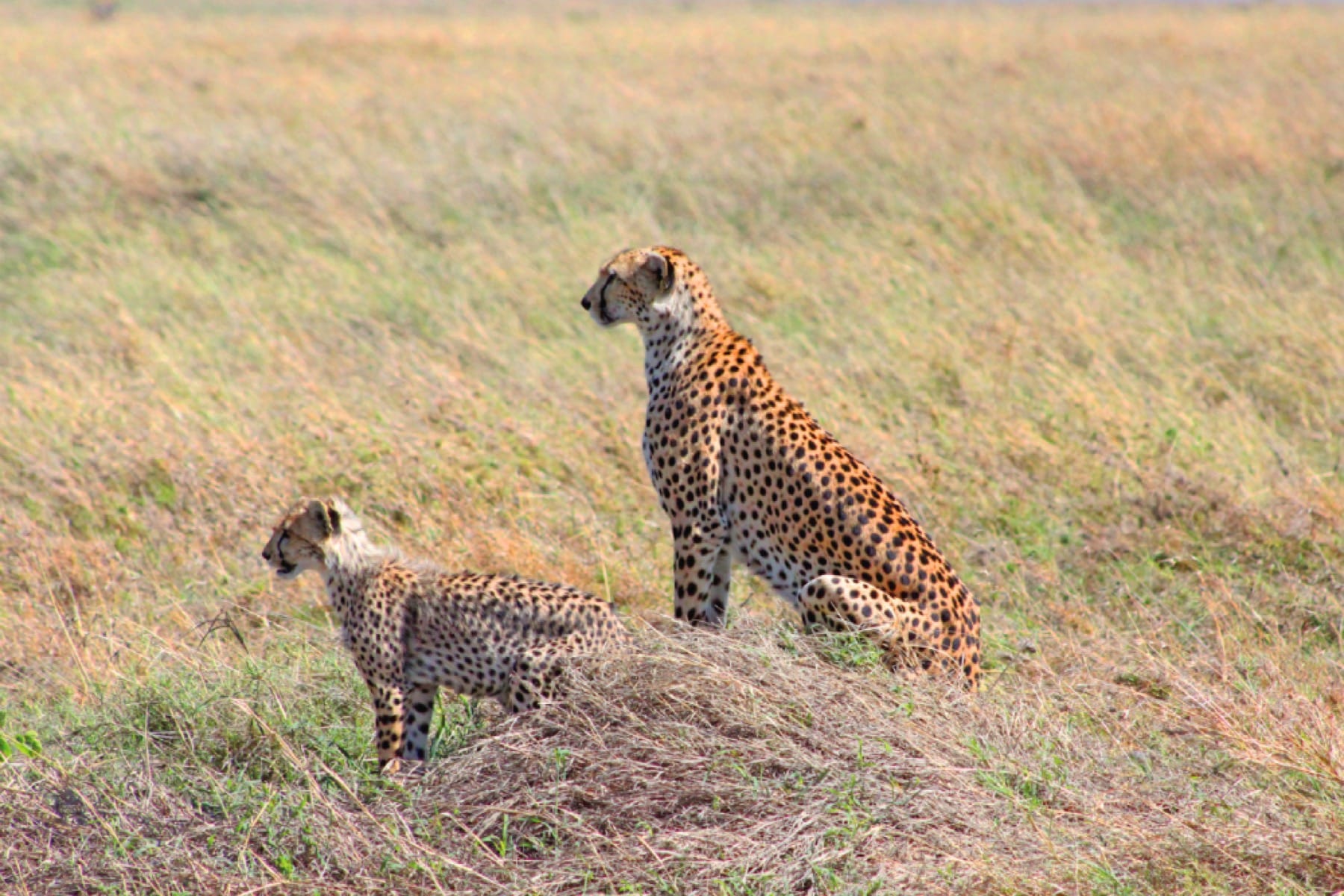 Other common predators are the golden jackal, black-backed jackal and bat-eared fox, with the former being most likely to be encountered due to its relatively diurnal habits. By contrast, giraffe and impala, both common on the surrounding plains, are totally absent from the crater floor. In the case of the giraffe, this is possibly attributable to a lack of suitable browsing fodder, or to the difficulty of descending the steep crater walls, but the absence of impala is a mystery.

A high proportion of the 550-plus bird species recorded in the Ngorongoro Conservation Area inhabit the crater floor. For casual visitors, a highlight is the large flocks of lesser and greater flamingo that aggregate in Lake Magadi, tinting its margins pink from a distance. Common grassland specialists include ostrich (the world’s largest bird), Kori bustard (the world’s heaviest flying bird, known for its spectacular mating dance) and a host of smaller ground birds including the exquisite rosy-throated longclaw, the babbler-like rufous-tailed weaver (a species endemic to the Tanzanian interior) and various larks, wheatears and pipits. Moist grassland often supports flocks of the lovely grey crowned crane and (in the rainy season) huge flocks of migrant white, black and Adbim’s storks. Lerai forest is the place to seek out striking woodland specialists such as Hildebrandt’s starling, green wood hoopoe and Fischer’s lovebird. 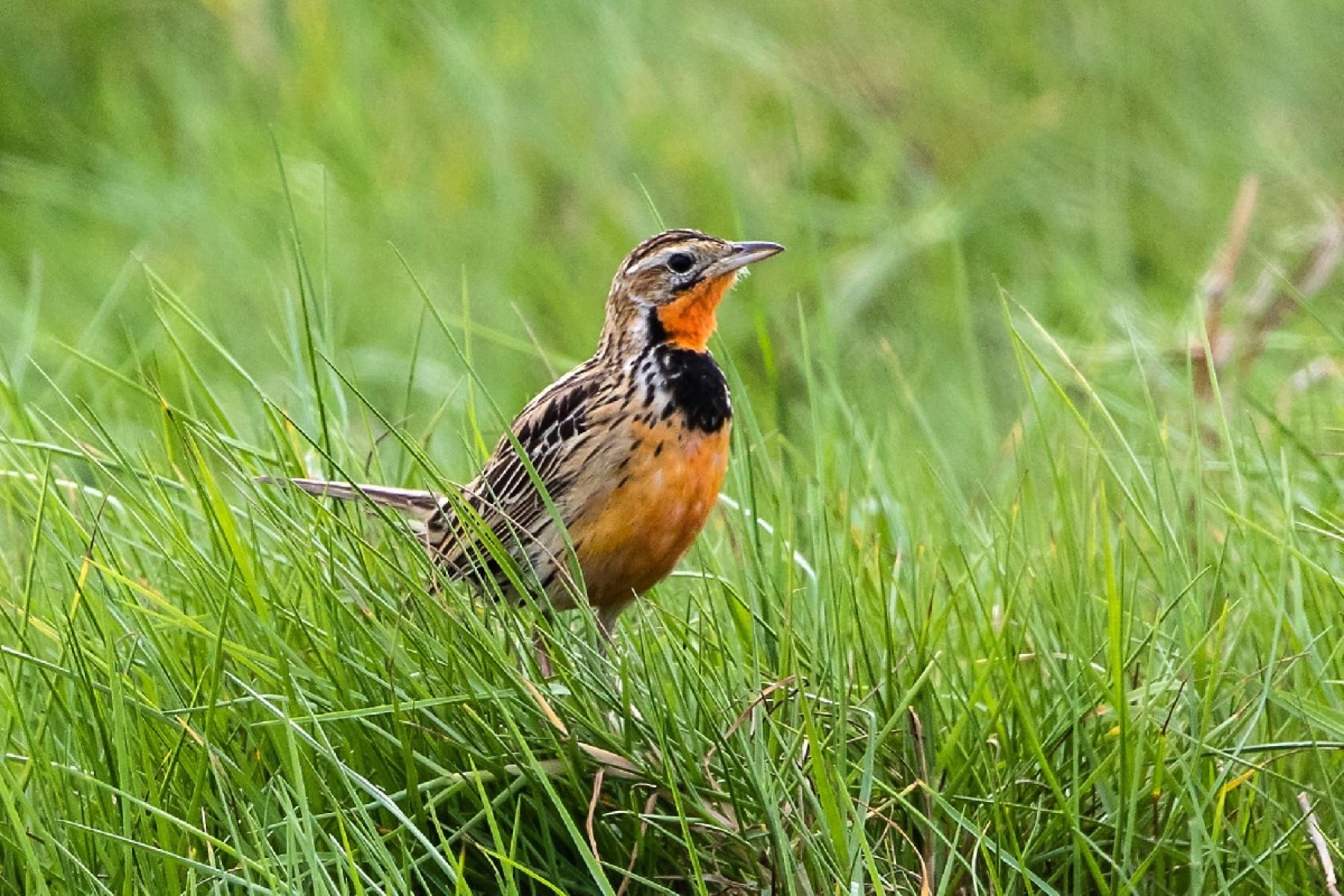 Raptors are abundant. The most conspicuous species is the handsome augur buzzard, sometimes seen here in its unusual melanistic form, but always distinguishable by its reddish tail. The crater floor is ideal habitat for the secretary bird, an anomalous long-legged terrestrial hunter that stands up to 1.5m tall and feeds mainly on snakes, which it stamps to death in a bizarre flailing dance. The most interesting of seven vultures recorded in the crater is the Egyptian vulture, a localised species whose who know to crack open ostrich eggs by holding a stone in its beak, making it the only avian tool-user. Finally, on the subject of scavenging birds, watch out for the black kites that haunt the picnic site at Ngoitokitok Springs, swooping down on unprepared tourists to snatch the food from their hands!

The Afromontane forest that swathes the crater rim supports a very different flora and fauna to the crater floor. Mammals are thinly distributed, but the forest does support a dense population of elusive leopards, plenty of blue monkeys and bushbuck, as well as the secretive bushpig and the localised tree hyrax (which is more difficult to see than the rock hyrax, but reveals its presence with an far-carrying eerie nocturnal call that sounds like it comes from a much larger creature). Colourful forest birds often seen in lodge gardens on the crater rim include bar-tailed trogon, cinnamon-chested bee-eater, baglafecht weaver, tacazze sunbird, malachite sunbird, golden-winged sunbird and Schalow’s turaco. 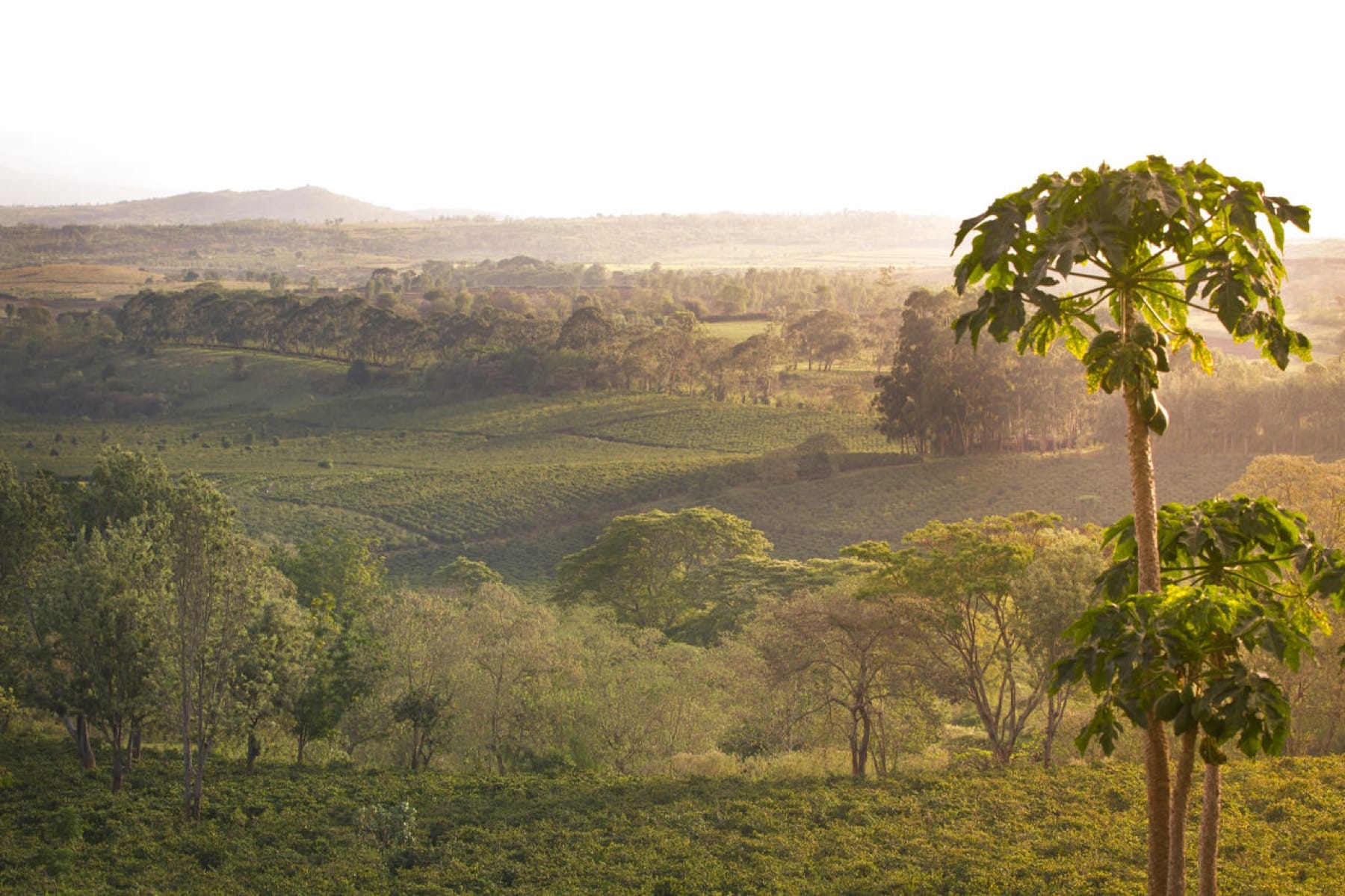 Elsewhere the crater highlands support a cover of open Afromontane grasslands where low volumes of grazers such as buffalo and zebra coexist with domestic cattle owned by the red-robed Maasai who still pursue their traditional pastoral lifestyle in the area. Game is rather more prolific in the relatively low-lying short-grass plains that stretch west from the base of the Crater Highlands to the Serengeti border. Indeed, this Serengeti-Ngorongoro border region is the main focal point of the annual Serengeti migration of more than two million wildebeest and other ungulates during the rainy season (typically from late November to early May) and it is also where the wildebeest calving takes place over February.