Each year, millions of wildebeest and plains game journey in a circular route from the north of the Serengeti in Tanzania to the south of Kenya’s Masai Mara. Considered the most spectacular of Africa’s natural phenomenon, the wildebeest are driven by pure instinct, making this one of the greatest shows on earth.

In the flocks of herbivores, you will find gazelles, zebras, and wildebeest. They are also accompanied by carnivores that stalk the herds as they move from grasslands to forests. These animals travel over 1600 kilometres, crossing various landscapes, predatory threats. This epic fight for survival is an enthralling experience for any safari-goer.

One of the most frequently asked questions about a Great Migration safari is which country is the best place to observe this amazing spectacle. Both countries have a similar geographical landscape, the same animals and the option of extending your safari from the savannah to incredible Indian Ocean beaches. The only thing that differs between Tanzania and Kenya is the language and culture of the people who reside in both desirable destinations.

The wildlife of both Kenya and Tanzania is very similar. You will get to observe the Big Five, the wildebeest and plains game in great numbers and numerous bird species. The type of habitat determines which animals you will see, not necessarily the country. That is to say, the savanna parks, even though they are separated from each other, usually present similar wildlife, which will be different from the those in the wetlands or forested areas. Often in the same park, one will be able to observe a variety of species, all participating in this intriguing cycle of life.

The changing landscapes of Tanzania means that there are a variety of specialised wildlife and birds that have adapted to each biome.

The weather in Kenya varies by location, from mostly cool every day, to always warm/hot. The climate along the coast is tropical. This means rainfall and temperatures are higher throughout the year. At the coastal cities of Mombasa, Lamu and Malindi, the air changes from cool to hot, almost every day.

Tanzania’s climate is tropical and coastal areas are hot and humid, while the northwestern highlands are cool and temperate. There are two rainy seasons; the short rains are generally from October to December, while the long rains last from March to June. The central plateau tends to be dry and arid throughout the year.

Both countries offer very similar levels of accommodation, ranging from budget-friendly to luxury options. Luxury accommodation is often centred around bigger towns and cities, often on route to the remote wildlife reserves and parks you will be venturing to. Most parks and reserves offer 'glamping' opportunities; comfortable yet remote camps that can vary from a more rustic-style location, but with all the amenities you're accustomed to.

Accommodation options in both Kenya and Tanzania can vary from rustic glamour to sheer luxury.

Best time to go on safari in Kenya

Best time to visit Kenya is June to end of March, with the majority of the migratory herds will be in the Masai Mara during September and October. The epic Mara river crossing happens during August.

Best time to go on safari in Tanzania

Best time to visit Tanzania is from June to end March. The migration is in the Serengeti between November and August, with the herds spread out between Tanzania and Kenya between September and October. In January to March the herds are in the south of the Serengeti to calf. The Grumeti river crossing occurs during August.

Opt for a HerdTracker safari
HerdTracker, the revolutionary app developed by Discover Africa is able to track and predict the Great Migration’s movements so that you never miss out on joining this amazing spectacle. We give you live updates from both Tanzania and Kenya, so check back on our page frequently to make your safari experience a worthwhile and memorable one, no matter which country you see it from. 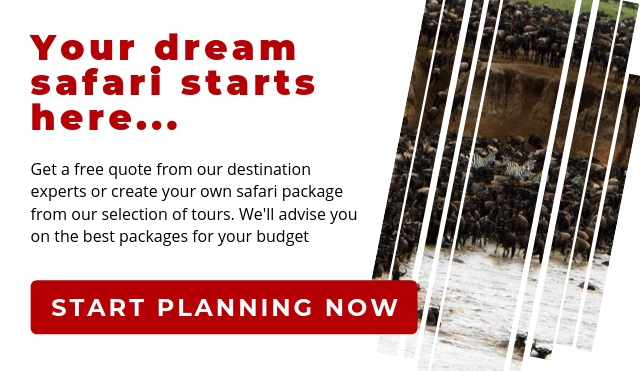