The ultimate guide to your next Mount Kenya National Park Safari

For the thrill seekers out there, you’ll find the perfect blend of wildlife and mountain to explore

Mount Kenya is the second highest peak mountain in Africa, with its highest peak standing at approximately 5 199 meters above sea level. It also serves as a UNESCO World Heritage Site and a realm of the mythical Kikuyu god known as Ngai. The ancient Kikuyu people built their customary homes facing this sacred peak as they believed it was a place of light; hence the name Kirinyaga.

Mount Kenya comprises three magnificent peaks namely Nelion (5 188 m), Lenana (4 985 m), and Batian (5 199 m), all of which offer various degrees of difficulty when it comes to mountain climbing. These peaks also provide wildlife and birds with distinctly different environments and landscapes, thus making them unique ecosystems that can be vastly different from one another. You can expect rainforests, African moors and rocky terrain. The mountain flaunts a ragged series of peaks crowned with snow that creates crystal clear pools of fresh water at the base of the slopes. The best time to get a fascinating view of the mountain is at dawn when the early light of day silhouettes its stunning summit high over the plains surrounding it.

Mount Kenya National Park is also home to the Big Five (elephant, lion, cheetah, leopard, and rhino) and troops of baboons and monkeys whose fascinating behaviour is a joy to observe. You will also be able to see such animals as waterbucks, tree hyrax, elands, and the white-tailed mongoose. Expect birds in abundance, with owls, eagles, nightjars, ibises and hawks taking centre stage.

Looking for Something Unique? 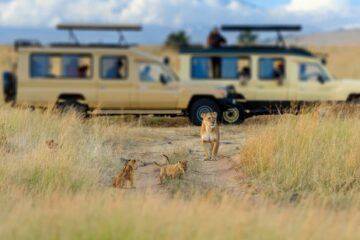 Way above our expectations and we felt sad to leave!

Kenya's fantastic safari areas are safe to visit, and the country's kind, welcoming people will make your journey unforgettable. A Rhino safari is no different if you are accompanied by a safari guide in a safari area. There should not be any problems.
Show More FAQs