In Zambia, an elephant mum finds herself in a wild tug of war with a ferocious crocodile after it gets hold of her trunk.

The Luangwa River in the South Luangwa National Park is where the female elephant and her baby were drinking when they were attacked. Unexpectedly, a vicious crocodile leapt out of the murky waters of the river and bit down on the female's trunk.

Attack: The crocodile struck from the water as a baby elephant and its mum were drinking from the river. 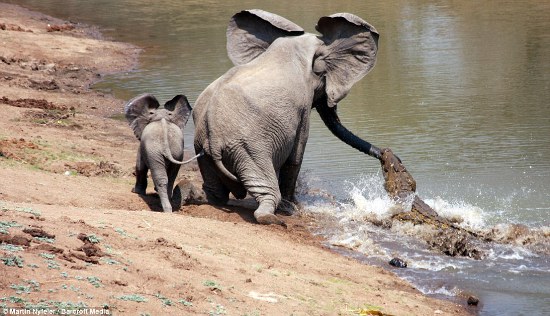 Scared and unable to help, the baby elephant hid behind its mum as the crocodile attacked. 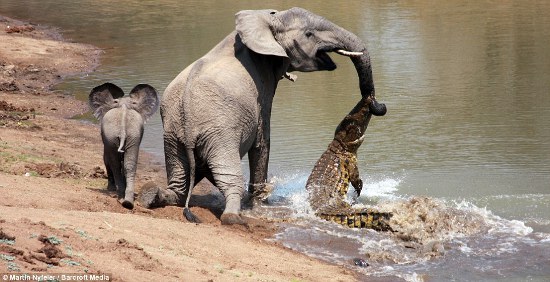 The elephant didn't give up and turned away from the water, even though the predator clamped down on her trunk and wasn’t showing any signs of letting go.

With its incredible strength, the female managed to shake off the crocodile after pulling the crocodile onto land, elephant turf.

The mother elephant survived the attack along with her offspring, even after the baby elephant tripped over the croc as the pair ran away.

The elephant managed to turn away from the water and pull it onto land, even though the crocodile was trying to pull her in. 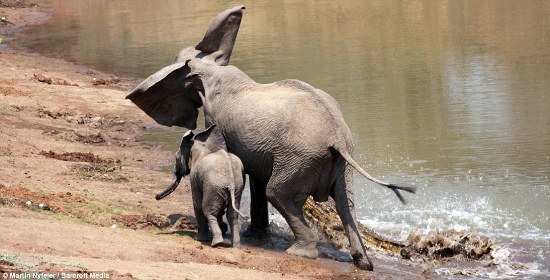 With her baby safe, the mum stepped away from the water with the croc still clutching on to her trunk.

The mighty elephant dragged the crocodile all the way out of the water as she backed away.

Despite the croc that was latched onto the elephant, she and her baby broke into a run.

Free at last! Water gushed from the mum's trunk as she finally managed to shake the croc off of her trunk. The baby momentarily tripped over the predator before the pair made it off safely.

Both the mother and child elephant were seen feeding from the river later in the day.

A similar attack was captured on camera in the Chobe River, Botswana: