Steven’s South African Safari Route Map I had the pleasure of chatting to Steven, an Australian who spent 17 days in South Africa. Steven travelled with his partner Callum. The pair were invited along by Callum’s parents, Jeff and Karen. The trip was a family gathering to celebrate the 60th birthday of…

I had the pleasure of chatting to Steven, an Australian who spent 17 days in South Africa. Steven travelled with his partner Callum. The pair were invited along by Callum’s parents, Jeff and Karen.

The trip was a family gathering to celebrate the 60th birthday of Callums father, Jeff. Together, the four of them explored South Africa’s largest city - Johannesburg, the malaria-free Madikwe Game Reserve, Cape Town’s sun-kissed beaches and scenic winelands, as well as the Kapama Private Game Reserve nestled in between the northern Drakensberg mountains and the Greater Kruger National Park. 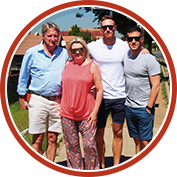 Steven owns and manages a chain of independent hardware stores in Sydney, while Callum is a Commercial and Partnerships Director at a marketing agency.

Steven and Callum were inspired to come on safari by Callum’s parents - who had been to South Africa before - and fell in love with it. That’s why they thought it would be a great place to celebrate Jeff’s 60th birthday as a family!

Steven, Callum, Jeff and Karen landed at Johannesburg’s O. R. Tambo International Airport at around 3:00 p.m. and were soon transferred to the Saxon Hotel, Villas and Spa situated in the quiet, tree-lined neighbourhood of Sandhurst.

Care for a dip? The pool area at the Saxon Hotel, Villas and Spa

The group spent the first two nights of their South African safari here. Steven loved the beautiful African décor and the staff were always at hand to meet all their wants and needs.

“The rooms superseded my expectations!”

Steven says that the rooms at the Saxon superseded any expectations that he originally had, with its huge suites and oh-so comfortable bed!

During their stay in Johannesburg, they managed to go on a tour of Soweto - where they got to experience one of South Africa’s most historical townships, first-hand.

Jeff, Karen, Callum and Steven familiarised themselves with the Soweto township life

According to Steven, the spa services at the Saxon Hotel, Villas and Spa were excellent - he added that the masseuse was highly professional, and attentive. He couldn’t find fault with anything, in fact, he recommends the hotel for travellers who appreciate service, attention to detail and a memorable experience!

After saying goodbye to the Saxon, they were transferred to the Madikwe Hills Private Game Lodge situated in the 75,000 hectare Madikwe Game Reserve - right on the border of Botswana and South Africa.

Steven said that one of the main reasons they chose this lodge was because it’s situated in a malaria-free zone. The group had a sensational time here, which they say proved to be an experience of a lifetime.

“The rangers and trackers were excellent and knew exactly what they were doing.”

The rooms were spacious, offering them complete privacy. Inside Steven and Callum’s room was a private plunge pool with a huge bathroom, outdoor shower and a living area embellished with lux traditional African décor.

With game on the lodge menu, Steven and his fellow travellers were treated to some of the most authentic tastes and flavours that South Africa has to offer!

Say cheese! The group pose for a picture before a game drive in the Madikwe Game Reserve

Steven says the rangers and trackers were excellent and knew exactly what they were doing. They managed to see so much wildlife, including elephant, rhino and lion!

A pride of lionesses playfully roam about in Madikwe Game Reserve

Steven and the crew left Madikwe Game Reserve and were transferred to O. R. Tambo International Airport once again to catch an afternoon flight to Cape Town. On arrival, they collected their pre-booked rental car and headed towards a penthouse situated in the beachy suburb of Camps Bay.

Their apartment overlooked the glistening Atlantic Ocean and they were a stone’s throw away from the beach and the vibrant cafés and restaurants along the Camps Bay seaside strip.

During their time in Cape Town, the group went on a boat trip to Robben Island - visiting the place where the iconic Nelson Mandela spent 18 of his 27 years in prison. They also managed to visit scenic wine farms of Stellenbosch and Franschhoek, enjoying the world-class wines and the Cape Dutch architecture on offer.

Time to eat! The group had lunch at Babylonstoren’s Babel Restaurant in Franschhoek

Steven and the rest of the group left Cape Town behind them and arrived at the Eastgate Airport in Hoedspruit just after noon, before being transferred to Kapama Karula, a luxury safari lodge tucked away on the banks of the Klaserie River and their home for the final stretch of their South African safari.

Touch down at the Kapama Karula luxury safari lodge, the final stop of their South African safari!

They loved the facilities here while staying in the superior suite, which provided them panoramic views of the Klaserie River and the lush vegetation of the malaria-free Kapama Game Reserve.

The staff at the lodge were excellent and incredibly helpful. Steven says that there was no gym at the lodge, but the staff arranged that they were transported to the wellness center owned by one of their sister properties on a daily basis.

Inside the spacious superior suite at Kapama Karula

Steven says the highlight of their stay at Kapama Karula was undoubtedly the game drives through the Kapama Game Reserve. Their game ranger Julius managed to get them to see Africa’s Big Five wildlife - lion, elephant, buffalo, leopard and rhinoceros!

After a hearty breakfast at the Kapama Karula, the group was transferred back to Hoedspruit’s Eastgate Airport for a flight to Johannesburg, before catching an early evening flight back home to Sydney.